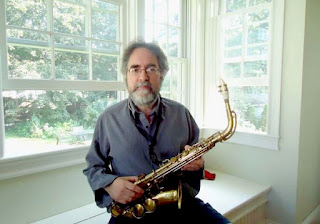 Based in Portland, Maine, alto saxophonist and composer Allen Lowe is one of this music’s most vital and intriguing figures, though this fact is predicated by a lack of knowledge on the part of even the deep-digging jazz obsessives. Lowe was born in 1954 and has been based in both New York and New Haven as well as his current adopted home. As a player he has a sharp, brittle and acrid tone, reminiscent at times of the scattered Bird feathers of Jackie McLean, Julius Hemphill, Oliver Lake and Tim Berne. He used to favor the tenor with a similarly tough, albeit huskier approach, and for a time also played the guitar. Lowe is also incredibly prolific as a composer and bandleader (with about fifteen albums to his credit), organizer, historian and author. When he releases a new record, it’s generally culled from a number of different sessions and rarely numbers fewer than four discs. He’s also curated multi-disc sets on the blues, early jazz and rock & roll, and published several books on American music that focus on artists that have slipped through the cracks.

Lowe probably feels a degree of kinship with these crack-slips, regularly championing such obscure heroes as Hemphill, altoist Dave Schildkraut, pianists Jaki Byard and Al Haig. Lowe was, after all, on the first wave of rediscovering the somewhat forgotten masters who worked with Charlie Parker and were part of bebop’s infancy, many of whom were still living in the late ‘70s. It’s no surprise, then – or it shouldn’t be – that on the 18th of October, when Lowe convened a public recording ‘marathon session’ for his next multi-disc salvo at Brooklyn’s iBeam, it was subtitled “An Evening of Talent Deserving Wider Recognition.” An evening is perhaps an understatement, as the proceedings began at three in the afternoon and went on well past ten. Several of the musicians brought onboard are young firebrands that have given the city's free music scene some necessary fire – guitarist Ava Mendoza, cornetist Kirk Knuffke, and bassist Shayna Dulberger. Then there were Lowe’s regular right-hand men, bassist Kevin Ray and pianist Lewis Porter, and heavyweights like trumpeter Randy Sandke, saxophonists Hayes Greenfield and Bobby Zankel, clarinetists Paul Austerlitz and Ken Peplowski, and drummer Lou Grassi, all top-flight musicians who tend to fly just above the radar. The day also included a rare appearance by pianist Ursula Oppens, and brought onboard the excellent drummer Miki Matsuki and baritone saxophonist Lisa Parrott, both new names to this writer.

Pianists Loren Schoenberg and Kelly Green performed complementary albeit rather different solo recitals to introduce the proceedings. Schoenberg’s blended Tristano’s blocky maelstroms with George Crumb and was aptly titled “Micro-Cosmics,” while Green performed three variations on an "idea" of Mary Lou Williams in airy, arpeggiated stairsteps that reflected on Monk and Waldron with her own glassy stride. As she put it to the audience, “I though I’d have to learn all these voicings for solo piano and Allen just gave me a hand written lead sheet and I’m free to do what I want.” That tack presumably carried through most of the suites throughout the session. Mary Lou Williams’ music was thematically borne out further in a piece called “The Mary Lou Williams Disconnected Suite for 6 Instruments” featuring Lowe, Austerlitz, Mendoza, Porter, Dulberger and Matsuki.

In this piece, a plastic, medium swing and tough yo-yoing between the dry, syrupy chatter of Matsuki’s drums and Dulberger’s rock-solid bass supported Austerlitz’ terse, warbling flights. Mendoza, a semi-recent transplant from the Bay Area, slips easily between jazz, blues and garage-rock tropes in her concise soloing, and it is curious that she doesn’t yet receive as much verbiage from the press as some of her peers. Lowe’s approach to Parkeriana is shot through with open burble and a quizzical melodic sense that isn’t as common as it could be among contemporary altoists, both incisive and a little bit diffuse. Following a dense, stomping piano rhapsody the theme, which was only briefly courted at the outset, was given more attention, a loping Ellingtonian poem giving rise to a second set of soli with further reflections and dusty elaborations on the written material, with Porter taking a particularly rugged approach leading into Dulberger’s motoring, snappy pizzicato. The piece closed in free time as Mendoza’s dusty wires gave it thin, coiled juice. Another take was called, shorter and with soli hitting a bit faster – and as this was a live recording session, ironing out and editing together components will presumably create the definitive version.

Lowe mentioned that the chamber quartet that followed was a favorite, and it’s easy to see why. Playing four variations on another Williams theme, “She Loved Him,” were Oppens, Ray, and the horns of Peplowski and the leader. One doesn’t usually think of Oppens as a ‘jazz’ pianist, though her soft dissonances and caressing, lightly angular swirls led and chased Peplowski’s wet middle-register wander and Lowe’s drier, sharp entreaties and by the fourth variation, the quartet became a certifiable unit. Kevin Ray should be more visible than he is – able to “hear around corners” (as Mingus would say) and with a deep tone and light, continual invention, he’s truly a musician to keep an ear on. For a change of pace, the next group presented abstractions on Americana as only Lowe could construct them, an anti-Frisell country-blues-rock modern jazz hybrid that took more from Graham Bond and Carla Bley than Nonesuch slickness. Joining Lowe, Ray, Mendoza and Matsuki on six originals were the violinist Larry Feldman, with a hair-raising amplified swoop (he’d apparently never played a ‘jazz’ gig before this one) and the gravelly dexterity of Lisa Parrott’s impressive baritone. The second tune, “Rags to Nothing,” carried a light, twangy swing contrasted with harried, gutbucket undertones, Mendoza unfurling rockabilly knots vis-a-vis Fred Frith and Lowe’s acerbic curls displaying more than a tinge of AACM alto-itis. An untitled gospel piece followed with some of the most staggering guitar playing I’ve heard, somewhere between Rev. Charlie Jackson and Canterbury crawl, elevating what was already a beautiful tune into something truly extraordinary.

Another ensemble brought back Austerlitz’ clarinet and joined Knuffke and drummer Jeremy Carlstedt to the core of Lowe, Ray and Porter to a Jaki Byard-inspired suite, or as Lowe put it in context, “Standard Variations.” The set started with two takes of “When Love,” an abstraction on “What Is This Thing Called Love?” and taking a cue from Mingus’ own variation on the theme, “What Love.” Carlstedt kept things in high gear with a socking pulsative tug, Lowe’s alto burred but elegant and Austerlitz in a graceful glide against the tempo, while Knuffke’s crumpled, fat sheen caught the ebb with an exacting burn. “Jaki’s Delight” brought forth an effervescent stomp, Porter slipping into a loose Latin feel and taking up the tempo after a passage of cool brass daubs and the leader’s harried shimmy. “Bud Out” had a similarly jaunty arrangement, although (as the title might indicate) the time and resulting soli were freer.

The day closed with a ten-piece ensemble adding drummer Lou Grassi, reedists Bobby Zankel and Hayes Greenfield, trumpeter Randy Sandke and tubaist Christopher Meeder to the core of Lowe, Porter, Ray, Parrott and Austerlitz, working out a piece titled “The Five Stages of Grief/Meditations on Disintegration (or: The Specter of the Specter of Death).” The thematic material, of a piece with Lowe’s more dour and dissonant slow numbers, was given to sweeping off-kilter gestures with a doubled ensemble, drawn from the post-Ellington/Mingus/George Russell aesthetic that emerged in the early- to mid-1970s. Choppy waters appeared and led into a Latin section, Greenfield digging in on c-melody and introducing the scrappy precision of Sandke’s horn. Lowe’s arrangements, while they stamp themselves out with certainty, are loose and meant to give as much room as possible to the soloists. In this context the rhythm section nudges in and out of time, supporting each given player with a glinting carpet when necessary, at other moments counting out a shimmering bash for the front line’s didactic pan-tonal tumble and jubilant fanfare.

Bringing together such disparate musicians and compositional strategies in a concert recording environment also served as a “release shindig” for the most recent crop of five Lowe discs, four of which are titled In the Diaspora of the Diaspora and include many of the artists in the day's groups. The discs also brought onboard guitarist Michael Gregory Jackson and saxophonists Gary Bartz and Hamiet Bluiett; major forces in creative music when Lowe was coming up, they have appeared less frequently in recent years (though Jackson is certainly enjoying a revival). The fifth disc, Matthew Shipp Plays the Music of Allen Lowe (subtitled I Alone: The Everlasting Beauty of Monotony), invites the semi-regular pianist and collaborator into an octet with a range of Lowe conscripts rather than Downtown heroes.

It should be no surprise that as I write this in January, Lowe is already crowd-sourcing the release of a CD set featuring selections from the day’s events, although many of us are still gradually working through the last crop or two of discs. He has a tendency to intersperse music from a number of different sessions and groups, so it’s fair to assume that the resulting album won’t progress in the same fashion that the day’s marathon did. Keeping up with Lowe’s voluminous productivity is not an easy task, made all the more challenging by the fact that the music is so damn good. It is a wonder that his work isn’t touted as much as it should be, though the absence of an external hype machine has likely encouraged Lowe’s conviction as much as it has provided consternation. Lowe has been threatening to move closer to New York though in the end, living a stone’s throw from The Stone isn’t all it’s cracked up to be.