Boston-based guitarist, improvising composer, writer and educator Garrison Fewell made his exit from Earth on July 5, 2015 at the young age of 61; he’d been battling cancer for quite some time, yet despite the challenges of severe illness he self-published a book of interviews with improvisers, recorded and released a clutch of new discs, and performed as often as he could. I never met Fewell personally but we did share a number of exchanges via email and social media, and I was able to catch him in a striking duet performance with saxophonist John Tchicai (1936-2012) at the Cornelia Street Café several years ago. A professor at Berklee College of Music, Fewell – whose own education traversed the realms of blues, jazz, free music and traditional non-Western musics – was a restlessly inquisitive, generous and humble man who cited Buddhist teachings and things he learned from fellow players well ahead of any self-created pedagogy.

Fewell had written texts on guitar improvisation, but his most recent published work is a collection of musician-to-musician interviews titled Outside Music, Inside Voices, and is something like a spiritually-centered version of Art Taylor’s Notes and Tones. Fewell rarely cites his own views on a certain artist, preferring to reflect on meaningful experiences of their work and engaging their music and personhood with profound empathy, while still being able to get into the nitty-gritty of artistic process. Fewell interviews some of his collaborators including Tchicai, trumpeter/flutist Roy Campbell, Jr. (1952-2014), violinist Rosi Hertlein and trombonist Steve Swell, as well as a range of modern musicians such as bassists William Parker and Joëlle Léandre, poet Steve Dalachinsky, pianist Matthew Shipp, reedist Henry Threadgill, and percussionist Han Bennink.

Though Fewell’s line of query is not entirely fixed, he does ask each musician what the importance of spirituality is in their work, and the answers differ drastically – some players encounter the music from a secular standpoint, others with deep religiosity, yet the telepathic dialogue and connectedness that improvisers participate in is seemingly universal even when couched in material transcendence or a unification with God. While some interviewees are not particularly inclined to use the word “spiritual” for their practice, owing to the term’s many weighty trappings, pianist Dave Burrell’s answer to the question of a relationship between spirituality and improvisation is perfectly simple: “There is a truthfulness that binds improvisation to spirituality. The improviser strives for oneness. The masters of improvisation have practiced until they have achieved clarity that brings a more beautiful tone. Repetition generates energy, boosting spirituality’s intensity. I have been told that John Coltrane achieved his high level of spirituality from intense study.”

Spirituality is non-denominational; to read of musicians describing it, being spiritual may ask for intense self-reflection and critical study, but the results of such efforts (some call it “practice”) bring clarity of vision and a healthy connection between creative mind and athletic skill. Fewell acknowledges in discussing the subject with multi-instrumentalist Joe McPhee that “some musicians wrestle with the word ‘spirituality.’ It’s possible that misunderstandings have developed around the word that have unfairly earned it a poor reputation. Or some might prefer to leave such things unspoken, to be expressed in musical ways. For me, the root of spirituality is ‘spirit,’ which I believe can be thought of and lived in different ways with individual interpretations at the very heart and soul of creative music.” Like a number of musicians in Outside Music, Inside Voices, McPhee’s response to this quandary is deceptively simple: “when you mention ‘spirit,’ I think of that not so much in a religious context but more like the center, the soul of the music. Where it comes from, I don’t know. I haven’t found it yet – it’s somewhere around there.”

While much conversation is devoted to biography and practice, starting each dialogue on the subject of spirituality, whether it’s viewed as the eternal now or a methodical, rigorous practice, gives a lens through which one can engage the work of a diverse sector of contemporary improvisers. In a testament to Fewell’s generosity and egoless approach, in which he’d rather talk about favorite works by his subjects than his own playing strategies, Fewell often asked musicians about their peers – Tchicai comes up often, as do saxophonists David S. Ware and Marion Brown, bassists Johnny Dyani and Wilber Morris, and other departed figures who this text insists not be forgotten. It’s likely that a number of musicians in the future will bring up Garrison Fewell the same way. 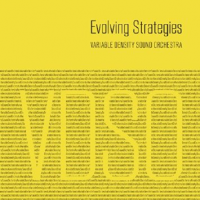 The most recently-released chapter of Fewell’s recorded presence is Evolving Strategies with the Variable Density Sound Orchestra, waxed in January 2012 but not released until 2014 (NotTwo MW 911-2), and joining Fewell, Tchicai, Campbell, Swell, bassist Dmitry Ishenko and drummer Reggie Nicholson on seven compositions: Swell’s “Mystical Realities” in two versions, four from the guitarist’s book and two from Tchicai’s. Fewell’s bent, bluesy comping and non-linear interjections are full but querying and present a certain wholeness that can be both powerful and non-specific. These fuzzy cells and craggy shards have a tendency to goad his partners into passages of centered density and splayed incision, as on Swell’s opening slinky hymn, and provide a blanket of muted clamber in areas of spidery collectivity.

Fewell was raised in Philadelphia and studied with Philly guitarist Pat Martino (whose own trajectory encompassed greasy organ trios, Indo-jazz and free improvisation), as well as in the college music department he eventually called home, and even in the context of free music, his playing is remarkably rooted. “Thoughts for Dixon” moves through duet, trio and quartet sections, thematically recalling Wadada Leo Smith and Anthony Braxton through condensed pirouettes before Tchicai, Fewell and Ishenko enter into the choppy waves of invention, followed by brass and percussion in a section of pinched boisterousness, while “Return and Breathe” shifts from cottony string harmonics and delicate breath to punchy collective improvisation over a rubbery vamp. It’s odd to think that half of the musicians on this very fresh-sounding, ebullient and husky slice of contemporary improvisation have now departed, but at the same time, this disc is a testament to the art form’s continuing gifts, presented with copious substance and little flash. Chicago pianist-composer Muhal Richard Abrams titled a 1975 Delmark LP Things to Come from Those Now Gone and the sentiment that we still have many nuts to crack from Fewell’s offered hand doesn’t go unnoticed.