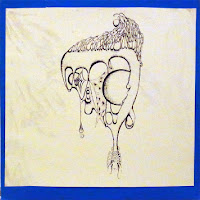 Rarely do I offer downloaded music at Ni Kantu, but in the spirit of a previous offering of the music of Michael Cosmic’s Peace in the World (Intex/Cosmic), here is another volume of the Phill Musra/Michael Cosmic trilogy. Though picking favorites isn’t really my thing, I would have to say that The Creator Spaces has gotten the most spins in my household over the years, probably because the program sort of “eases you in” to the far out stuff, starting with a beautiful flute melody set to the shifting sands of hand percussion and Huseyin Ertunc’s steady, pulsing cymbal waves on “Egypt.” Certainly the music gets quite free, but there’s a homemade fragility to it that puts it in a different class from that of, say, the AACM (which Musra and Cosmic were a part of early on). Like Ertunc’s Musiki (probably recorded at the same session), the band is a stripped-down trio with Musra on reeds and percussion; Cosmic on reeds, organ and percussion; and Ertunc on drums. There is also some track overlap with Musiki, as that album features an alternate of “The Creator Spaces.” Musra has said he hopes to reissue this album someday but in the meantime has asked me to make it available as a download.
Tracks:
Phill Musra – flute, tenor, soprano saxophone, zurna (oboe), percussion
Michael Cosmic – flute, alto, sopranino saxophone, clarinet, zurna, organ, percussion
Huseyin Ertunc – drums and cymbals
Recorded 1974 in Cambridge, MA and engineered by Larrymar Richards, released as Intex 84.
Get the FLAC files here (from about as clean a copy as you could get).
Posted by Clifford Allen at 8:57 PM