Biting Off More Than We Can Chew 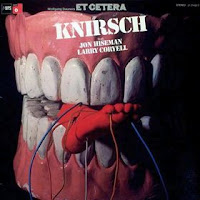 As I write this, it's becoming more and more of a challenge to find the time to post serious reviews, interviews and articles - what with a full time non-music job, partner and other interests. I've lamented the fact that the inflow of new releases (most of which, at this point, I'm interested in and would like to review) is quite heavy, while the available time for output is light. Recently, I have thought about taking a bit of a hiatus to see how it feels. However, one overarching problem is this - the world of creative music moves extraordinarily quickly in terms of its conversation, to the point that it is very easy to all of a sudden feel completely left out. It's an ironic problem because if the music is really lasting, a few weeks or a few months lapsing between a disc's release date and writing about it shouldn't matter. At All About Jazz and the New York City Jazz Record, for example, there is a one-year delay applied in that one can write about 2010 discs in 2011. It allows the material to settle in and also shows an understanding that there's just so much to sort through from year to year, the community of writers can't possibly be expected to stay on top of it all.

The artists whose work I return to time and again are those who seem above or beyond the fleeting temporality of bleeding-edge discourse, but that doesn't make it easier to feel that sometimes the train has left the station. A case in point is a collaborative review-discussion on Bill Dixon's Envoi (Victo, 2011). This will soon be published at the Destination: Out website, where my review and a short interview with trumpeter-improvising composer Stephen Haynes about the work and performance will be in dialogue. Through various exigencies, it's taken a few months longer to get this piece completed and posted and it will be well after the initial onslaught of reviews have gone to press. The music itself is so far beyond "contemporary" that such timeliness shouldn't matter - it was released only a matter of months ago, anyway - yet in the initial sales-hype machine to which the reviewer is inexorably linked, that slice of time could be decades past.

While lately it has been hard to find time to pop the headphones on at work and strike a few keys in the direction of criticism, one easy place to remain attached to the conversation is Facebook. It only takes a few seconds to "like" someone's post or contribute a pithy comment. The same goes for retweeting things on Twitter. It's already been established that this is a poor facsimile of dialogue, but nevertheless it does give the creative music community some degree of visibility and virtual activity. For a few days on either side of the event, people can honor the birthdays of John Coltrane, Bud Powell and Sam Rivers or rail against an abusive club owner until we once again slip into our normal day-to-day. It's something we're all part of here - myself included, most definitely - and that fleeting immediacy seems to be the state of critical discourse as well. Writing about music right now requires keeping pace with the ADHD-inflected state of information dispersal, whether one likes it or not.

Obviously I have no answer for this dilemma, or even whether I'll take a break or not - after all, things have to get finished including several end-of-month reviews for this and other sites, tidying up the transcription of an interview with the late composer Graham Collier, and a couple of exciting liner-note projects. Next week I'll be in New York to catch Anthony Braxton at Roulette; maybe that will be just the shot in the proverbial arm that is needed to keep the work at the "right" level. We shall see.
Posted by Clifford Allen at 11:45 AM