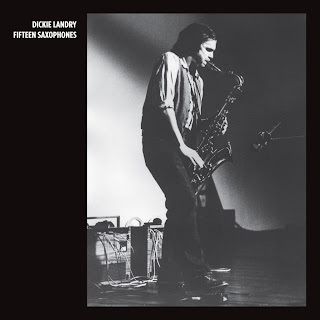 Coming out this spring on New York/Seattle/Austin-based label Unseen Worlds Records is the reissue of seminal late 1970s solo saxophone and flute work from composer-instrumentalist and visual artist Dickie Landry. Fifteen Saxophones was originally issued on Northern Lights Records in 1977 and had a German pressing on Wergo back in the late 1970s, but this is its first time on CD (there will be a high quality LP reissue as well, and dig the new cover art). I penned the liner notes, which were culled from hours of interviews conducted at Mr. Landry's home in Lafayette, Louisiana. If you haven't heard Landry's music and are curious about his work, which straddles the lines between 1970s process music ("minimalism") and avant-garde jazz-derived improvisation, there probably isn't a better place to start than here. Hopefully this project will result in the surfacing of more of Landry's archival recordings in the future. Though I've been lucky enough to be involved with a number of releases from the liner-writing perspective, I'm proudest of this one, for I can recall when the project was just a glimmer in the collective thought patterns, over cheap beer most likely, of UW proprietor Tommy McCutchon and myself. Starting on the ground floor and now seeing the work in one's hands is a special feeling indeed. You can purchase this and other Unseen Worlds releases here.
Posted by Clifford Allen at 3:22 PM

Email ThisBlogThis!Share to TwitterShare to FacebookShare to Pinterest
Labels: artists