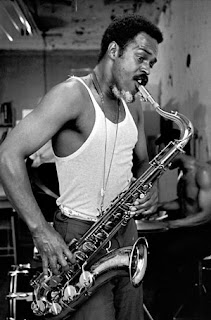 Recently, I was lucky enough to be invited to write the liner notes for a new recording from tenor saxophonist Louie Belogenis that features drummer Sunny Murray and bassist Mike Bisio. It’s called Tiresias and it will be out soon on Porter Records. In talking with Louie, a major point that came up was how important Albert Ayler’s 1964 ESP-Disk recording Spiritual Unity (with Sunny Murray, drums and Gary Peacock, bass) was, as a way of expanding the tenor-bass-drums trio approach toward a sense of group listening. He says the following: “Bisio and I listened to that record intensely; Ayler switches back and forth between dusky and bright, or open and more condensed actions, but it always flows. A lot of free music is process, versus classically-structured event-oriented music. To that end, Sunny changes things up immensely all of the time, because he’s an astute listener, prodding and suggesting to the soloist all kinds of ideas – he’s playing with you as much or more than he’s giving you a carpet to play ‘on’.” This Ayler recording is often thought of as, following Sonny Rollins’ piano-less trios of the late ‘50s and Coltrane’s “Chasin’ the Trane,” a real formative piece in the “power trio” mold. My thinking has become – and it wasn’t always this way – that Spiritual Unity is the anti-power trio, or at least its power isn't only because of its full force. It’s as much about group interaction and space as it is the harrowing density of Ayler’s tenor. After all, that early music was also very influential on the Spontaneous Music Ensemble (“One Two Albert Ayler”) and the AACM (the Art Ensemble of Chicago composition “Lebert Aaly”). Those are two settings for which group interaction across space and environment are paramount, and one might not expect Ayler to be crucial in their palette of influences.

Joe McPhee, the saxophonist and multi-instrumentalist, has also been suggested as a major acolyte of the Ayler school. In a 1999 Cadence Magazine interview with Robert Spencer (published 11/2000), he notes: “I know I’m associated with Albert’s music and I love it, and I’ve certainly been inspired by it, but I don’t see that my music is that close to it, in terms of sound, even. But certainly that was the direction I was aiming for when I started playing the saxophone. That’s what I wanted, was that sound. That wonderful – just filled with colors! It really excited me!” McPhee’s work in Trio X is a sparse reflection on Ayler among other things – as I wrote in a forthcoming review of their 2008 US tour boxed set (CIMPoL), “[this set] captures very well the seamlessness with which the band moves through a palette of emotions vis-à-vis theme and improvisation. McPhee can get an extraordinarily huge sound out of his tenor, and he works through lines with cascades, splashes and drizzles that explode out of folk forms, often in tandem with Dominic Duval’s pizzicato plenum and Jay Rosen’s airy, continuous crash. Obviously there’s a precedent for this music in Spiritual Unity, but Trio X does not end there – rather, this kind of improvisation is a node arrived at on their collective journey.” McPhee’s music has long been rooted in parallel actions, contrasting and unifying, and that certainly has a precedent in Spiritual Unity – Ayler’s hot tenor blur set against the independent pizzicato filigree of Gary Peacock and the disappearing-reappearing shades of Sunny Murray’s percussion. They gel into a unified field of action, but that doesn’t mean that each musician is exactly complementary – rather it’s an independent, related search for higher expression on a canvas of three.
The back cover of Spiritual Unity, shown at left, features a Gnostic “Y” symbol, said to represent the whole earth and presumably, in early Christian thought, relating to the Holy Trinity. Ayler himself did say, in reference to a trinity of modern saxophonists, “Trane was the Father, Pharoah the Son, and I am the Holy Ghost.” It’s pretty difficult to engage Ayler’s music on a non-spiritual level because he was such a deeply spiritual person, the self-created mythology of an old-world mystic slinging a tenor saxophone and wearing modern suits. For sure, he was perhaps a bit of an eccentric character, but most of the great creators in this music, and in art, have been a bit “out.” Leaving out his spirituality requires avoiding something that for most of is is so personal, and  it’s hard to place that meaning alongside the work’s musical significance. Though the spiritual aspects carry resonance for me, it always seems like a massive issue of its own, not meant to be carried alongside the music. Ayler has been talked about as a visionary for freeing things up in certain ways, but much of the musicological analysis (I’m thinking especially of the German scholar-musician Ekkehard Jost’s chapter on Ayler in his book Free Jazz) focuses on the density of his playing rather than the sparseness of it, or for that matter the multivalent way in which the Ayler trio worked through ideas. The music’s anti-systemic (spiritual) way of being is a revolt against some analysis, but the in touch and inquisitive mind naturally wants to figure out where the clear implications that have ensued actually come from – “I see the tree, but where are the roots and circles?”
I can’t exactly recall what I heard when I first listened to Spiritual Unity, but I can remember how shocking it was to hear Albert Ayler on record. I’d heard Coltrane, Eric Dolphy, Miles and Wayne Shorter (and apparently my dad played me Sam Rivers and Anthony Braxton when I was a baby), but nothing prepared me for the huge and garish sound that came out of that man’s saxophone. And I wasn’t even able to hear it live, which must have been quite a shock. My first Ayler record was Bells (ESP, 1965), a larger-group affair which I have a soft-spot for, but it didn’t take long before the trio and quartet music (with Don Cherry) entered my consciousness. My perception of it certainly has changed, as it sounds natural and swinging to my ears now, and that’s partly because it’s set in relief to – dare I say – more superficially “challenging” or “difficult” music. That’s not to say that Ayler is not still a stubbornly fascinating figure or that his music isn’t an about face from how jazz is “supposed” to sound to this day. But familiarity has brought my ears to a place with it that is comforting, finger-snapping even. After all, it’s impossible for me not to feel a kinship with a music that’s so clearly based on conversation and unification through difference, and that’s part of why Spiritual Unity remains resonant. That space is important, because it lets one either fill in with one’s own ideas and experiences, or leave it there for the sake of wonder – either/any response is correct. Maybe the “big” sound isn’t only of Albert Ayler’s saxophone, but of an immense area being granted us as listeners (and musicians) to do or feel something in accordance (or discordance) with. As with any great piece of art, it’s what you do because of it that matters most.
Posted by Clifford Allen at 4:23 PM