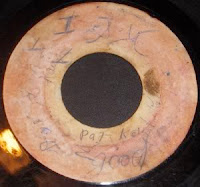 CIRCUIT DES YEUX
Ode to Fidelity
(De Stijl)
Ode to Fidelity is the new three-song 45 from Indiana’s Haley Fohr, a torch singer soloist who goes under the name Circuit des Yeux. She’s put out two full length LPs on Minneapolis’ De Stijl already, though this newest set of pieces strikes a chord that’s a bit more direct (less willfully experimental, perhaps), and as a result, it’s quite compelling. The A-side, “Barrel Down,” is the most fully realized cut, muffled processional strums providing a framework for a vocal impulse that moves through several iterations, from Magik Markers’ Elisa Ambrogio/Myra Lee-era Cat Power into a ghostly operatic siren song, multi-tracked and swirling into the red before being overtaken by six-string scree. The flip features a riff from the minimalist gutter, a la Thalia Zedek fronting The Static, in the opening “Self Satisfaction,” followed by the shambled instrumental trance of “March with the Rich.” These days, oddball sides either seem to slip through the cracks or get too much hype, making one yearn for the days of, quite simply, a good lo-fi single, which Ode to Fidelity certainly is.
KEEFE JACKSON / FRANK ROSALY DUO
s/t
(Molk)
JOOKLO DUO
The Warrior
(Northern Spy)
If there’s ever a genre of music that hasn’t really made it to the seven-inch single format, it’s probably free jazz. Sure, Blue Note released 45s of top selling artists like Hank Mobley, Lou Donaldson and Art Blakey back in the ‘60s (there were even some sweet red vinyl Kenny Dorham singles floating around), but that music had a danceable relevance in clubs and with Black radio DJ’s. The format wasn’t too well-suited to the avant-garde at the time, considering statements were often album-length at least. Sure, ESP had a couple of odd out-jazz singles for some reason (a Paul Bley Trio and an Ayler/Ornette split!), as did FMP and the ever-irreverent Dutch label ICP, and even stranger was a jukebox variant of Coltrane’s Ascension. But these were extreme oddities.
Cut to now, as the 45 has gone through a period of being the de facto medium for punk rock and outsider music, the concept of an avant-garde single isn’t quite as strange. Regular partners Chicago drummer Frank Rosaly (Scorch Trio, Dave Rempis Percussion Ensemble) and tenorman Keefe Jackson (Fast Citizens) cut a hand-printed example on white wax in 2009 for the Windy City indie label Molk (though it was recorded in 2005). More than anything this record is a testament to the concision apparent in modern creative music, as the pair are able to make engaging, spry statements that aren’t cut short by the format, fitting limber Kalaparusha-like tenor flint and Rosaly’s dry tidal waves into two four-minute sides. The saxophonist’s jaunty composition “Word Made Fresh” takes up the A side, heel-digging yelps and smooth, eliding phraseology in direct counterpoint to the drummer’s chunky melodicism. A bent, keening purr against the push of mallets and churning patter makes up “Real Absence,” an improvisation credited to both musicians.
Jooklo Duo consists of reedist Virginia Genta and drummer David Vanzan, and their work has appeared on a number of instantly-out-of-print LPs, cassettes and CD-Rs that have captivated the New Weird Europa environment. The Warrior is the first Jooklo-related material to be released on a US label (the young Northern Spy Records is run by former ESP staff), and is supposedly going to be followed with a full-length. That’s a good thing, because the pair takes the screaming buzzsaw over-blowing of Duo Exchange (Rashied Ali-Frank Lowe, Survival, 1973) as a starting point, reed-splitting tenor micro orgasms slicing the air as fractured rhythmic brutishness stokes the flames on “Primitive Power.” The flip continues at the same absurd pace, clattering metallic polyrhythm supporting reedy vomit in both tenor and soprano variants, as well as clarinet. Like Arthur Doyle, the reed instruments are channels for expressive ferocity, and their precise nature seems unimportant beyond slight refinements on extreme action. The Warrior plays at 33 rpm, extending by a couple of minutes each slice of brain-scraping and smoke-clearing exorcism. Good shit.

Ed. Note: Northern Spy honcho Adam Downey has informed me that the Jooklo single is indeed a 45, though it has been sounding great at 33 rpm (the labels don't specify). This reminds me of the scenario where a friend had Coltrane's Black Pearls LP on 45 by accident and declared what a smokin' bebop record it was... anyway, try it at both speeds if you dare!
TALIBAM!
Cosmoplitude
(ESP-Disk’)
As mentioned above – and contrary to some of the literature out there – Cosmoplitude is not the first ESP-Disk’ 45, though it is the first to be released since their reemergence at the beginning of the last decade. At any rate, these two tracks exemplify the side of Talibam! (Matt Mottel, keyboards/vocals and Kevin Shea, drums/vocals) that’s keyed into the context of absurd dance-rock, as opposed to their more Zappa-Ra-noise leanings. “Cruisin’ the Cookie Isle” seems like an outtake from ESP debut Boogie in the Breeze Blocks, even reusing a police operator sample, and merges it with a hyperactive dance-party train wreck. It’s a fun and upbeat piece, but even Talibam! at their most Ritalin-addled still benefit from a longer-form setting to explore their ideation overflow. “Cosmic Attitude” is comparable, albeit a slower repetitive jam with Casio gloop pooling around electronic and acoustic beats, occupying a space of bleary-eyed early morning, semi-vacant dance floors and piss-soaked bathrooms. It’s a world that Talibam! may or may not be familiar with, but their mockery is one of the cruelest evocations of that setting I’ve heard. Cosmoplitude may not contain the most compelling music in their discography, but as with other Talibam! releases, it makes no claim to be anything beyond wry paradigm-changing gyration.
Posted by Clifford Allen at 12:03 AM