As the year draws to a close, with most holidays celebrated and top-ten lists submitted, the hope is that space has been left for tastes to grow and expand with new musical horizons and relationships to form over the coming twelve months. One challenge that I’ve had – and expressed here on a few occasions – is where dyed-in-the-wool jazz music fits into all of this. Despite an avowed love for historical jazz recordings as well as enjoying new music in the idiom, nevertheless the bug of challenge bites and I find myself questioning the current place of making refined statements within a timeworn linguistic structure (not that the same can’t be said for people working in the ‘free’ or avant-garde idioms).

Questioning, one must remember, doesn’t necessarily mean that a musical statement isn’t valid or engaging; rather, questioning something is a dynamic engagement with a thing or a concept. I can still find myself interested in and moved by music in the tradition while at the same time inquiring of that music’s function or value. Not coincidentally, the contemporary jazz that I find the most interesting is that which questions (in-) itself and for which expressive and structural boundaries are pushed at, even if only slightly.

Los Angeles’ Posi-Tone is one of the labels keeping close to a vision of modern, straight-ahead jazz that, while not particularly rough around the edges, remains full of surprises and engagement. Among their nearly fifty releases are discs by multi-instrumentalist and improvising composer Sam Rivers, trumpeter-composer Jim Rotondi, trombonist-composer Steve Davis (the New Jazz Composers Octet, etc.) and tenorman-composer Wayne Escoffery, alongside lesser-known or up-and-coming artists and ensembles. Not every title in their deep catalog is a winner, but in the several months that I’ve had to familiarize myself with a selection of their releases, there are a number which stick out. 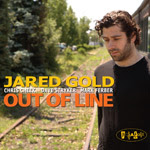 Organist Jared Gold is one player whose work is impressive, drawing on the playing of such seminal figures as Larry Young and John Patton for his harmonic choices, which are often salty and slightly dissonant. On Out of Line, his third disc for Posi-Tone, Gold is joined by guitarist Dave Stryker, drummer Mark Ferber and tenorman Chris Cheek on six originals and three covers. It’s a fairly strong statement to open one’s set with a cover of a tune like Hank Mobley’s “An Aperitif” (which appeared on 1967’s Thinking of Home, first issued in 1980). Cheek’s flinty, cutting tone meshes well with Gold’s stopps-pulled jounce and steaming modal clamber, propelled by a loose stoke from guitar and drums.
Minus tenor, the trio settles into an easy lope for “Preachin’,” which despite missing hard-toned fire (and not that Cheek is particularly ‘out,’ but his phrasing and projection are unequivocally weighty), nevertheless sports fine grit and ebullience. Stevie Wonder’s “You Haven’t Done Nothin’” has openness to its groove, though one does get the feeling that Ferber’s drums could have an external push to them. His dustily tasteful propulsion/carpet is clearly part of the axis on which chunks of electric grease turn, so a little more recorded presence could balance the proceedings. There’s pregnant ballpark goo to Gold’s tone on “It Is Well,” mostly a vehicle for organ, tenor and barely-there brushes, with Cheek’s cottony minor explosions providing an interesting counter to the leader’s grinding evocations. In all, Out of Line is a solid disc with some fine grease and expansive playing, but could have been better served with a little more realization of its “in the red” qualities. 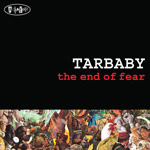 Tarbaby (winner of the “most charged band name award”) is a collective made up of drummer Nasheet Waits, bassist Eric Revis and pianist Orrin Evans, which formerly also included saxophonists Stacy Dillard and J.D. Allen. On the group’s second disc and first for Posi-Tone, The End of Fear, Allen is present as a “guest” along with altoist Oliver Lake and trumpeter Nicholas Payton. Evans has a kaleidoscopic approach to the tradition, heavily gospelized but also florid, ethereal and rhythmically crepuscular. The presence of Revis and Waits – along with the odd bits of studio chatter and samples – might seem to nod in the direction of Bandwagon redux, but there really isn’t much basis to compare Evans with Jason Moran. The trio moves deftly through “Brews,” a shifting array of reflections and expressions of the piano-trio, never losing its step or becoming overly flashy. That’s an island of pure form in a disc that does lean on conceptualism a bit – mostly clear in the use of sound-bites to shape the area around forays into dissonance like “Heads.” One would hope that they believe their music can stand on its own, free or inside, but attaching snatches of verbiage seems to unseat what otherwise is honest group playing.
“Jena 6” is pointillist, full of gradient shifts and subtle turns in its shortish length – like much of the music here, a wide range of colors and shapes are worked into and out of tracks that mostly hover around five minutes. This disc is one of the more adventurous recordings to feature Payton, and he gets a full seven minutes to stretch out around alternately lush and thrashing piano, bass, and percussion on “Hesitation.” Revis’ muscular arco, echoing an interest in players like Henry Grimes, Steve Tintweiss and William Parker, is quite well represented, and his throaty pluck helps to bolster the questing lilt at the heart of “Tough Love,” which compositionally (if not pianistically) recalls Andrew Hill. At times, one might wish that Tarbaby stretched the performances a bit lengthwise and shrunk their reliance on snatches of verbiage intended to shape our appreciation of the music’s aesthetic and social weight. Nevertheless, concision never really hurt expressive actualization. 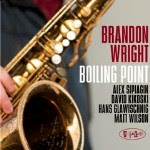 Tenor saxophonist Brandon Wright and alto saxophonist Jacám Manricks lead two strong small-group dates recently waxed for Posi-Tone; the former with Boiling Point and the latter with Trigonometry. Wright's session features venerable drummer Matt Wilson alongside pianist David Kikoski, bassist Hans Glawischning and trumpeter Alex Sipiagin. Wright has worked with the Mingus Big Band, Maria Schneider Orchestra and Chico O’Farrill, among others. A mix of originals and standards, Boiling Point opens strongly with “Free Man,” its bright head arrangement reminiscent of incisive Blue Note 1960s dates, and something about the tune and the front line nods toward the Freddie Hubbard/Wayne Shorter team. Wright himself is a rough-and-tumble hardbop tenorman, drawing from the school of tenor playing exemplified by Joe Henderson, Tyrone Washington, Sam Rivers, Alan Skidmore and their brethren, buoyed perfectly by a hard charging rhythm section. Though on the surface such a tune can easily fall into the “revivalist bag” (and it does), one forgets comparisons as “Free Man” rockets forward. Filmic lyricism imbues the following “Drift,” explored further in Kikoski’s opening, Wynton Kelly-like cadenza to “Odd Man Out,” which moves into odd-interval Shorterish lilt once the head comes around. Wright’s husky and sandblasted tone, coupled with turns of phrase that move well outside of cookie-cutter territory, mark him as one of those rare products of jazz education (U-Mich., U-Miami) willing to actually “search” within the idiom. One can’t say enough about the importance of that impulse, as well as the presence of inventive and dynamic sidemen, making Boiling Point feel like a “band” effort. 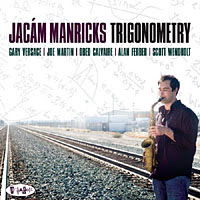 Already a busy figure on the New York scene, Manricks is going forward with young, semi-free innovators like drummer Tyshawn Sorey and pianist Jacob Sacks to support his larger-form compositional efforts (heard on Labyrinth, available here). Trigonometry is a quirky small-group date with pianist Gary Versace, drummer Obed Calvaire and bassist Joe Martin, with trombonist Alan Ferber and trumpeter Scott Wendholt guesting on three of the disc’s ten tracks (all are originals save for a cover of Eric Dolphy’s “Miss Ann”). On the latter track, Manricks is supported only by bass and drums, moving from the loquacious theme to a soft burble and gooey cry, with odd flurried warmth to his collected tones. Some of Manricks’ lines seem like those of a classical saxophonist, but their movement is bop-informed, like a weird update to Lee Konitz’ Motion. It’s no surprise that Dolphy would be an important influence – not necessarily because both are altoists, but because Manricks is also interested in broader concepts of organization, and has employed lush orchestral arrangements to his compositions in some intriguing ways. That lushness comes through on the sextet piece “Nucleus,” which if it nods in the direction of Gil Evans, does so in simpler knots, perhaps a little more on the Graham Collier side of things. The leader’s curlicues occupy a wholly immediate world, while chordal backing keeps Manricks’ arrangements hovering in the air. “Mood Swing” is a particularly fine feature for Versace’s darting classicism as a partial framework for the altoist’s lateral sketches, implications of dark grandeur from the composer’s horn. With two fine discs under his belt, as both a composer and improviser Jacám Manricks is a player to watch, questioning the nature of his art while still holding fast to tradition.
Posted by Clifford Allen at 12:35 PM