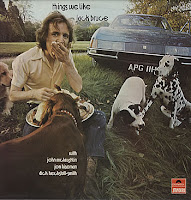 We critics are usually asked to pick a number of recordings, artists, labels and so forth to best exemplify both our preferences and our predictions for the year past/to come. In as much as a “best of” is kind of like the Nobel Peace Prize, one hopes it spurs on those who are doing well to continue doing their best at what THEY want to do (not what we critics might “like”), organize and share ideas ancient to the future. This year has also been heavy with losses – Bill Dixon, Marion Brown, Noah Howard and many others. Dixon’s loss was, for me personally, the most profound, though strangely his passing in July seems like eons ago because so much has happened since that time. That is a good thing – action is the best way to honor the passing of those whom we love and respect.
So, in short, here are the new releases and reissues that have interested me the most (in alphabetical order because I don’t play favorites). That’s not to say that there aren’t other awesome records that have been released or reissued since Thanksgiving 2009, but ten seems like a nice, round number. In fact, I’m still catching up on 2010 releases on Another Timbre, Clean Feed, Intakt, Kadima, No Business and Not Two, so stay tuned for more semi-belated reviews.
NEW RELEASES
1. Joshua Abrams – Natural Information (Eremite)
2. Circulasione Totale Orchestra – Bandwidth (Rune Grammofon)
3. Bill Dixon/Aaron Siegel/Ben Hall – Weight/Counterweight (Broken Research)
4. Grex – Live at Home (SUA)
5. Mary Halvorson Quintet – Saturn Sings (Firehouse12)
6. Stephen Haynes – Parrhesia (Engine Studios)
7. No Mor Musik – No Mor Musik (ugExplode)
8. Cecil Taylor/Tony Oxley – Ailanthus/Altissima (bilateral dimensions of two root songs) (Triple Point)
9. David S. Ware – Saturnian (Aum Fidelity)
10. Katherine Young – Further Secret Origins (Porter)


NOTHING IS MOST HONORABLE THAN...

Email ThisBlogThis!Share to TwitterShare to FacebookShare to Pinterest
Labels: best of, reviews