Some Other Stuff - Recent Reissues Reviewed 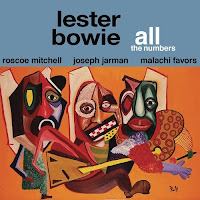 LESTER BOWIE
All the Numbers
(Nessa)
The early recordings of the Art Ensemble of Chicago are somewhat tough nuts to crack. Their first salvos were released in semi-succession by then-Chicago-based Nessa Records under the nominal leadership of principal hornmen Lester Bowie (trumpet; Numbers 1 & 2) and Roscoe Mitchell (saxophones; Congliptious and Old/Quartet). Beyond stalwarts in bassist Malachi Favors and reedman Joseph Jarman, the group (billed early on as the Roscoe Mitchell Art Ensemble) early on included drummers Robert Crowder and Philip Wilson.

When Wilson departed the group in summer 1967 to tour with the Paul Butterfield Blues Band, the Art Ensemble soldiered on first as a drummer-less trio and then as a quartet with the addition of reedman Joseph Jarman (it would be a few years before Don Moye joined as the group's regular percussionist). All the Numbers consists of several takes of the group improvisations and compositions that made up Lester Bowie’s first LP, also the debut from the solidified AEC lineup, which would go to Paris in 1969. To produce the LP, takes were mildly edited and spliced; here, they’re presented in unadulterated form across two discs, which also made up part of Nessa’s Art Ensemble 1967/1968 boxed set from several years ago.
As the group’s approach developed into a unified sound, the ensemble integrated the languages of R&B, bop, free improvisation, modern composition, and African musics into an often-theatrical whole. Early on, the seams between such focal points were much more obvious, present in a raw, go-for-broke aesthetic. The intensity of the individual and collective statements wrapped into All the Numbers is quite startling. Bowie’s growling, sputtering drawl and cutting pre-bop brass tones, paired with Mitchell’s feral, piercing alto make a striking combination. Of course, also ever present are the little instruments, providing orchestral nuance from the beginning – you didn’t usually hear bells, tin cans and harmonicas in New York free jazz.
While the music is unbridled in its intensity and able to achieve extreme volume with minimal means, meditative passages of arresting detail conjure the most depth – a stately duo ballad for trumpet and bass midway through “Number 1” is augmented by twittering scrapes, vocal wails and bells. As Favors’ strums pick up steam, Mitchell engages him with a brief, lyrical flute solo (actually recalling Nicole Mitchell), before resuming percussive clatter and yelps. Piquant, nearly saccharine alto tones dovetail with Bowie’s long brass lines amid halting, wound pluck, Mitchell unraveling longer sounds into haranguing staccato collisions and serrated brays, obliterating pensiveness with garish violence. Favors’ meaty, taut pizzicato is the primary rhythmic guide for this music, echoes of Jimmy Garrison and Gary Peacock in both his unwaveringness and dexterity, while he maintains a healthy swing and beautiful tone. The mishmash of dirge and Rip/Rig/Panic in the theme of “Number 2” might not be so carefully plotted without his bowed, metronomic sensitivity. 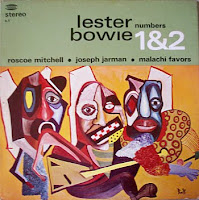 The quartet tracks – three versions of “Number 2” (which also gets the trio treatment) bring an only slightly thicker palette to the proceedings – Jarman’s additional reeds and percussion are certainly crucial to an orchestration of contrasts and give the piece a little more flesh. There’s an anarchic streak to his playing; Jarman's clarinet leaps from woody tension to volatility in a few short moments, sharply divergent from Mitchell’s delicate breaths. Bowie and Mitchell surely have that same element of “dangerousness” in their playing, but it seems much more controlled and when, for example, Mitchell’s phrasing becomes seemingly unbound, it’s still within a clear phrase logic, developing from terse and often repeated statements into something broader than intervallic relationships. Jarman, on the other hand, provides nattering comment alongside crushed brass while Mitchell is crisply unhinged on the opening minutes of “Number 2 (Take 7)” before the threesome become inseparable, swirling wind against Favors’ unyielding thrum. This latter twenty-minute take is closer to a group improvisation than the others, heave-ho rhythm and bent march-like rhythms engaged very loosely as Jarman, Bowie and Mitchell blast through its signposts in oblique reference.
All the Numbers provides a window into the earliest iterations of the Art Ensemble of Chicago, which entered its 43rd year of existence in 2010 despite the absence of Bowie, Favors (who passed in 1999 and 2004, respectively) and Jarman’s now occasional participation. Great Black Music began with a small group of individuals seeking transcendence through, among other things, rebelliousness and wit. If this merger of contrasting expressions of a great tradition is not always rendered seamlessly, the music is completely honest and often startling, retaining uniqueness and prescience decades on. Chuck Nessa and his estimable label deserve kudos and more notice for keeping this music in circulation.
Nessa Records currently doesn't have a web presence, but CDs on the label are available in the US from the Jazz Loft, City Hall, and Squidco. 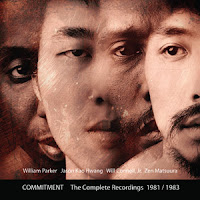 COMMITMENT
The Complete Recordings 1981/1983
(No Business)


There’s a curious blip in the early discography of bassist/composer/multi-instrumentalist William Parker, one which at first might not register as a crucial document of Afro-Asian improvised music, much less a need-to-have avant-garde rarity. Commitment was the name of a cooperative group based in New York which began performing out in 1978 and ceased working together in 1984; it consisted of Parker, violinist Jason Kao Hwang, drummer Takeshi “Zen” Matsuura and reedman Will Connell, Jr. Recording one self-titled LP in 1980 that was released on Hwang’s Flying Panda label, the group was a fixture in Lower Manhattan performance spaces like Verna Gillis’ Soundscape, also performing at the Sound Unity Festival, Kool Jazz Festival, and in Europe. But like many jazz records released in the early 1980s underground, its status as a self-produced document rendered it unheard by all but the most serious devotees of the music. This two-disc set on Lithuanian free-jazz devotee label No Business includes the complete Commitment LP as well as a recording from the Moers Festival in Germany, and constitutes the group’s only appearance in the digital realm.
The group initially came together via Hwang and Connell; as detailed in loft-jazz historian Ed Hazell’s liner notes (he also did the booklet for the wonderful Muntu boxed set also on No Business), the pair met at one of the jam sessions held on Sunday afternoons at the Basement Workshop, an Asian-American cultural center whose mission was to broadly serve communities of artists to enable visibility for Asian-Americans. It’s hard to quantify what exactly makes the music itself sound “Asian” though certainly Hwang’s violin work approaches tonalities quite far from those in Western music, a narrow, high and piercing sound that reminds one – perhaps – of some Chinese string music. When plucked, there’s an air of poise and the ears could hear zither or harp as well as violin. In improvised music, one is quite used to being able to parse certain African and European influences, even at the general level, while Chinese (Hwang’s heritage), Japanese/Korean (Matsuura’s), much less South and Southeast Asian influences, are harder to pinpoint. In some passages of Commitment’s music, it is rather a distinct “otherness” that prevails – tones and combinations not seemingly relatable to anything one has heard in Afro-American or European-American free jazz.
Compositionally, Commitment runs the gamut from a decidedly measured pace to frenetic free-bop. The high, lonesome whine and the scales that Hwang improvises on in “Grassy Hills, the Sun” for example, end up quite far from the prevailing Leroy Jenkins model. That particular piece’s spacious moving-through of thematic material, almost duet-like as Hwang, Parker and Connell occupy it at Moers, does have more than a twinge of AACM-music in it, specifically the early work of Anthony Braxton or Muhal Richard Abrams’ “My Thoughts are My Future – Now and Forever.” From the Moers set, Parker’s composition “Whole Grain” is a free-bop tune of the highest order; a jaunty series of cycles for alto and violin across a snappy, swinging rhythm erupt into Connell’s braying post-Ayler/post-Roscoe Mitchell worrying cells, needled by Matsuura’s dry chatter and eloquently placed bombs. Hwang’s solo is nothing short of astounding – ferocious ducking and diving, shrieks and hoe-downs paired with rusty honks and horsehair swirls. A Stuff Smith bounce edges in and Hwang doubles on a passage both strummed and bowed in a technical feat that serves expressive complexity. While traditional motifs are certainly part of this tune, its movement into spaces beyond that are nevertheless controlled marks a work of early maturity in Parker’s writing/organizing canon.
Two of Connell’s compositions open the original LP, “Mountain Song” and “The Web of Forces.” The former espouses pensive delicacy, flute and arco strings winding through a lilting theme outlined by malleted cymbals and toms. Narrow fiddle sawing and centered abstraction parallel and buoy Connell’s thin breaths on this brief, measured piece. Halting, chunky rhythm and bundled keen on the latter are a nod to composer-pianist Horace Tapscott, with whom Connell studied, though the quartet is quickly off to a run, heel-digging triple-stops leading into uncorked alto skronk, Matsuura’s floating amalgam of Klook, Elvin and Max providing a cooking anchor to front-line freedom. The drummer also gives a grounded energy to the precarious swirl of bowed violin, bass and alto clarinet on Parker’s unsettling tone poem “Famine.” When the foursome stretch out, as on the two Hwang tunes that make up side two of the original album (including the aforementioned “Grassy Hills, the Sun”) and especially on much of the Moers set, room to embrace spacious textures and concise energy is taken full advantage of.
Even at its sparsest, Commitment carries with it a foot-stomping energy, the push-pull of Parker and Matsuura a forward-moving presence even in Hwang’s delicate, AACM-inspired processional themes. “No Name” is imbued ever so slightly with Braxton/Jenkins alto and violin pacing, while also seemingly a nod to the pathos-laden pairing of Ayler and Michel Sampson. The solo order follows lines of lead voice and rhythm, though concentrated subdivisions of meter offer supportive activity to the similarly coiled instant compositions of Connell and Hwang. While barely heard in their half-decade lifespan, this peerless ensemble is once again available for investigation. Those interested in the work of William Parker will especially enjoy this set, as not only does it provide early strong examples of his work, but the germinating seeds of pan-cultural influence on his later career are also quite visible.
Posted by Clifford Allen at 12:37 AM