Breifly Reviewed: Phill Musra Group - The Creator is So Far Out 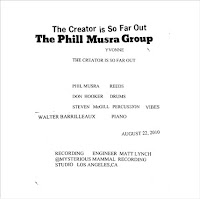 PHILL MUSRA
The Creator is So Far Out
(Sagittarius A-Star)
Los Angeles-based tenor saxophonist and his work/journey have graced the pages of Ni Kantu before, as we’ve dug up previously unreleased tracks provided by the man himself, as well as acquired windows into his life and recordings for the Intex and Cosmic labels with his brother, multi-instrumentalist Michael Cosmic (1950-2001). Though Musra has assembled CD-Rs of archival material to almost no distribution over the past few years, his visible output has generally remained known only to connoisseurs of rare records from a bygone era. That is until now, as what is officially his second LP as a leader in over 35 years has been released in a limited edition via the Sagittarius A-Star label. The Creator is So Far Out takes its title from a composition that also appeared on his 1974 Creator Spaces LP (Intex) as well as on the present album. Here, he’s joined by drummer Don Hooker, percussionist Steven McGill and pianist Walter Barrilleaux on two sidelong originals.
The core trio of Musra, Hooker and McGill has been together since last year, making live appearances on the West Coast (most often at the Heartbeat House in LA) and cutting some YouTube videos that have yet to go viral. As one would hope, there is a rather profound difference between this trio and what came before. Rather than the slightly-unhinged democracy of his 1970s free unit with Cosmic, Musra stretches out his husky and somewhat minimalist riff on Newk over dry, regular conga and trap set patterns on the lyrical, loving ode “Yvonne,” peppered with occasional throaty wails. The title track is taken in a bluesy direction, Barrilleaux laying down churchy chords around Hooker’s loose lope and Musra’s slightly wandering declarations. McGill’s brief, glassy vibraphone is used as a marker between tenor and soprano solos, on which the leader’s pinched tone contrasts curiously with the rhythm section’s chunky groove. Boxy electric piano and flute shortly make a strange pair, as Musra runs through his arsenal. There’s always been an outsider quality to Musra’s music, and thirty-odd years ago that unbridled and sometimes unfocused energy probably contributed to his and his compatriots’ “unknown” status. Now, of course, that naturalness is something many musicians “work” to achieve, and if Musra’s music is a little more reigned in today, it’s not without a folksy honesty that makes The Creator is So Far Out a charmingly humanist statement.

Though released in a very limited edition, some copies should be available in the US from Eclipse.
Posted by Clifford Allen at 1:08 PM