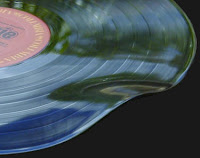 Gleam
(Porter)
If you haven’t heard the Glass Orchestra, seek out their Music Gallery Editions and private-press LPs from the late 1970s and the fantastic Tales of Siliconesia seven-inch. You’ll be rewarded handsomely by their expressions of whimsy, humanity, and compelling interplay through improvisations utilizing glass, water and voice. Their discography has been digitized and made available through the blogosphere (I’ll leave that up to you), and one would assume that this new disc on Porter Records from GO participant Miguel Frasconi is the harbinger of more commercially-available glass music down the pipeline. Gleam is a fascinating series of free duets between Frasconi and prepared pianist Denman Maroney, with the former on various glass objects, water, and glass harp. The expansion of the piano’s resources through preparation and use of the strings (bowed, plucked, etc.) are an acoustic parallel to electronics, namely that both offered new sound-worlds at a certain point, though one required no tape to enter that space. Bowed and rhythmically knocked glass offers a similar bevy of extended acoustic resources, to the point that if one were not made aware, one might think that Frasconi’s music is electronic. From agitated haranguing and scraping to ghostly arcs, ethereal rhythmic tap and dissociated clink, the glass landscape wavers in and out of tonality and deliberateness, abetted by metallic counterpoint. Blown glass and miniscule knocks couple with seasick piano scrape on “Gliss,” occasional keyboard gestures adding smirking definition to vicious upward and downward slides. The twenty-four minute “Glass” allows Maroney’s piano to stretch both outside and in, building tension through detail with obsessive plucks and easing with bluish clusters. It’s not massive music, but it is dense, a constant array of small and unfamiliar noises encouraging and counteracting one another with extraordinary dynamic range. Hopefully, more from Frasconi’s glass inventory will be forthcoming.
ANDREW LAMB TRIO

New Orleans Suite
(Engine Studios)
New Orleans Suite was recorded in 2005, right after Katrina hit the Crescent City, but this 2010 release is its first appearance on disc, bringing together longtime collaborators reedman Andrew Lamb, percussionist Warren Smith, and bassist/multi-instrumentalist Tom Abbs, on six original compositions. Though Lamb is based in New York, he came up in Chicago and, upon moving east in the 1970s, began studying with former AACM saxophonist Kalaparusha Ahra Difda. Smith, too, is an expat Chicagoan, though he left the city before the AACM was formed. Nevertheless, this trio sonically occupies an area akin to the Chicagoans’ music, making heavy use of space and little instruments alongside evocations of a deep Gulf coast blues feeling.

Certainly a big part of that is Lamb’s playing – a throaty and gruff, heel-digging tenor sound with sad-eyed soul and a drawling cadence. That Lamb is an heir apparent to Kalaparusha, Sam Rivers, and other loft-jazz tenor heavies is made clear on “Rescue Me,” a furious-yet-clean power trio of chord particulates, cymbal slush and callus dust. It’s the third piece in, following Smith’s poem “Dyes and Lyes,” which is set to weary swing and free punctuation, and the colorful Rollins-trio roll that begins “Katrina’s Path.” The latter shifts from athletic, loose rumble and cottony leaps to explorations of lazy-Sunday traipse and tonal singularity. Tuned toms provide an interesting counterpoint to Abbs’ eliding pluck in a lengthy mid-piece walkabout before the trio’s wave crests in the final minutes. “Back Water” begins a section that owes much to the AACM and early Art Ensemble aesthetics – it’s a lolling walk through a field of bells, shakers, orchestra vibes and voice, cello adding punch and commentary (think Lester Lashley in Roscoe Mitchell’s Sound group) along with digeridoo and clarinet warble. Tenor, bass, digeridoo and percussion signal “Song of the Miracle Lives,” a burnished upward march flanked by rattling auxiliary percussion. If there was ever any doubt whether the tradition of Great Black Music and its rural/South (side) sparse jubilance has relevance within contemporary free music, Lamb’s New Orleans Suite would quell it.

Dutch-born and Brooklyn-based composer and lute player Josef van Wissem has had an extraordinarily fruitful decade, one which has resulted in nearly twenty albums of composed and improvised music for Renaissance and Baroque lute. While in a sense his work is based in minimalism, it is also in part a reimagining and restructuring of seventeenth century songs into a decidedly current fold. Of course, it’s not much of a stretch to place earlier music and contemporary minimalism on a level playing field (spiritually and structurally), though when minimal composers have drawn from western sources, they’ve often harmonically predated the music van Wissem uses for his compositions. The lute – or any guitar-like instrument – isn’t the first axe of choice in the pantheon of minimal music, though an analog can be found in the incredible Guitares Dérive LP recorded by French guitarists Vincent Le Masne and Bertrand Porquet (Shandar, 1974). Van Wissem’s compositions stem from simple phrases inverted and overlaid, but exploring their nakedness further would diminish the impact of the music, which is shockingly great. A folksy processional begins the set, entitled “The Day is Coming,” dusky and evenly-paced piano-like chords outlining ornate middle and upper-range threads, like blocks and glass in cyclical interplay. The tours de force are “Amor Fati” and “After the Fire has Devoured All, It Will Consume Itself” – the former merging wincing ascension with a brooding parallel lilt, strands of subtly varying thickness and impulse intertwining as a self-canceling dirge, eventually adding jaunty filigree and short eddies of reflection. “After the Fire” is brighter, beginning in an unadorned singsong melody wrapped in shimmering strum that is at turns translucent, gauzy, and raveled. Melodies alternate current, becoming foreground or drone in push-pull, stabilized by third and fourth shades between them. Ex Patris an incredibly beautiful record, the kind of accessible minimalism that we’ve been missing of late.

Creak above 33 is the third disc (counting a set with David Grubbs on Important, The Seven Storey Mountain) to feature the duo of trumpeter Nate Wooley and percussionist Paul Lytton; as with the others, this material is completely improvised. One might, looking at the pairing of an English sound-sculptor with an American explorer of expanded brass technique (albeit within the realms of heavy tradition and structure), compare this music to the work of Tony Oxley and Bill Dixon of a decade ago, and that wouldn’t be entirely wrong. But it wouldn’t be entirely right, either – Wooley has a certain bravura and youthful classicism to his playing and, in between the growls, hiccups, guffaws and brass splatter, one can detect how he would have “fit in” to a contemporary jazz orchestra or new jack hardbop unit. Working this expressive range into a duo with electronically-aided glitch and rattle, contact-miked crunch, bullroarer and feedback makes for an intriguing, alien proposition.

Lytton employs a (seemingly) distracted field of micro-sounds that results in garish gestures which retain a sheen of utter randomness, like an animal rooting through litter. That’s probably why the duo works so well. On paper, Wooley’s crisp, measured approach and cutting swing might seem at odds with the percussionist’s disheveled canvas. That’s not to say that Lytton doesn’t “swing” or have rhythm, as he delicately taps into the trumpeter’s broad-interval assemblages on “Filtering the Fogweed” with at least quadruple-time, then lets him hang with only the occasional steely accent. Wooley uses an amplifier and is sometimes closely miked, allowing needled valves, breathy whispers and spit to mingle with electronic resistance, but even when his resources parallel electro-acoustic impulses, there’s a tautly controlled aspect far different from what Lytton espouses. The pair moves from terse exploration into athletic charge on “The Lonely Fisherman,” small-sound chug and scraped mimicry part of Lytton’s arsenal equal to Wooley’s percussive fluffs and gulps. Through contrast and comment, the duo becomes one organism, the sources of merging incidents becoming only partially clear – such as the wigged amplifier whoosh (Wooley) and rattling chains and bow-and-spring (Lytton) in seeming homage to cracked live electronic music on the closing piece. Of course, make no mistake, Creak above 33 is utterly contemporary and like many Emanem/Psi releases, will reveal itself over years of listening.

Posted by Clifford Allen at 2:23 PM