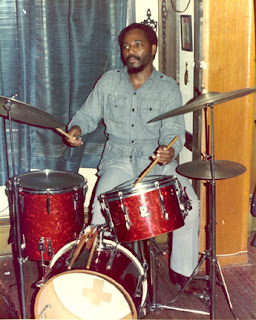 There’s a perfect coining of post-Fire Music developments in African-American jazz in the 1970s and 1980s – “from ragtime to no time” – and it is courtesy of the drummer Beaver Harris. This was the name of the first LP issued by the cooperative 360 Degree Music Experience, on their own 360 Records label, and perfectly encapsulates (albeit broadly defined) the aesthetic of tradition-into-freedom and vice versa espoused by the second and third wave of avant-garde jazz musicians.

William Godvin “Beaver” Harris was born April 20, 1936 in Pittsburgh, Pennsylvania, and started out as a youth on clarinet and alto saxophone. His family encouraged athleticism as well as music, and his initial mark was made as a baseball player in the Negro Leagues, playing with the Pittsburgh Homestead Grays and the Kansas City Monarchs for five years as a teenager. He began playing drums more seriously in the Army while stationed in Europe, and at the encouragement of Max Roach, Harris moved to New York after his discharge in 1962. Shortly thereafter, Harris began working regularly in Sonny Rollins’ quartet (one of his early 1960s units that went sadly unrecorded), beginning an association with tenor players that remained strong until the end of his life.

In 1965-1966, Harris began one of his most fruitful and long-lasting associations, with tenor saxophonist Archie Shepp, which resulted in 17 albums spread out over the next decade for labels such as Impulse!, Enja, Horo, Freedom, Uniteledis, and Black Saint. The pairing of Shepp and Harris was, perhaps, helping to plant the seed of the “ragtime to no time” philosophy, because Shepp’s music heavily embraced the blues tradition alongside free, collective improvisation and cutting post-bop arrangements. It was in one of Shepp’s brass-heavy mid-1960s combos that onetime AACM drummer and percussion-historian Alvin Fielder saw Beaver Harris at the Plugged Nickel in Chicago, what turned into a life-changing experience. “Sun Ra always told me to play loose, because I was trying to play all the bebop coordination-things, and he said ‘loosen up!’ I didn't know what he meant. Beaver Harris came to town with Archie Shepp, Roswell Rudd and Howard Johnson. I heard what Beaver was playing with that group, and I went back the next night and that was what changed my way of thinking about the drums. Time/no-time, but the shit was swingin'! I heard that and I had to go home and think about it.”

Harris was also working as a sideman with Shepp’s mates in the mid-60s – figures like alto saxophonist Marion Brown and trombonists Roswell Rudd and Grachan Moncur III, lending his earthy, free swing to Brown’s Juba-Lee (Fontana, 1966) and Three for Shepp (Impulse!, 1966) as well as Rudd’s Everywhere (Impulse!, 1966). But it was Albert Ayler whom Harris became the most associated with aside from Shepp; he replaced Sunny Murray in 1966, adding a splashy allover groove to the Ayler brothers’ marching band music represented by In Greenwich Village and The Village Concerts (both Impulse, 1967) and Paris/Lörrach, 1966 (Hat Hut). He remained in New York for most of the 1970s, travelling to Europe to play with the Cecil Taylor Unit and as an early associate of tenorman David S. Ware. Harris was not only a sideman with free jazz heavyweights, however – he worked in an unrecorded Thelonious Monk quartet with Wilbur Ware and saxophonist Pat Patrick, as well as in a mid-70s Chet Baker/Lee Konitz band and with pianist Barry Harris (no relation).

In 1968, Harris formed the 360 Degree Music Experience with Moncur and pianist Dave Burrell, which performed at the 1969 Actuel Festival in Amougies, Belgium, but did not record until the 1974 self-produced album From Rag Time to No Time (360 Records). As Timothy Marquand wrote in the liner notes to that LP, “From Rag Time to No Time is not a chronological survey of jazz styles. It is about a circle of communication, and underlying sense of community that improvising musicians feel when they gather to express themselves. With honest and creative playing, communal ties are strengthened and the circle expands to welcome those who share by listening.” Musicians like Doc Cheatham, Maxine Sullivan, Marshall Brown, Cecil McBee, Ron Carter, Hamiet Bluiett, Makanda Ken McIntyre, Don Pullen, Titos Sampa and Francis Haynes are among the musicians that participated in the ensemble over the years, resulting in further recordings for Red Records and Cadence Jazz, as well as a tremendous 1977 double album on Black Saint entitled In:Sanity.

One of the most surprising collaborations in Harris’ career was with the guitarist and improviser Rudolph Grey, most regularly associated with the no wave scene in New York during the early 1980s. The group, the Blue Humans, also included reedman Arthur Doyle, and was one of the most unique, cross-stylistic bands of the period. Grey relates “I think Beaver saw this as an opportunity or outlet to use his “free jazz” skills without any formal constraints. I believe I first saw Beaver play live at Studio We in 1975 with Dave Burrell. The power, skill and intelligence of his playing is something I’ll never forget. In 1977 I caught him playing with the Cecil Taylor Unit in Amsterdam. When he played at the Tin Palace a few years later I spoke to him, mentioning that I had taped him at that gig. I met with him and played him a tape of what I was doing; we got into a studio and later did a duo at the Squat Theatre. As a trio with Arthur Doyle, we played at punk clubs like Hurrah's, TR3, CBGB's, and made some waves as this form of music was new to these clubs and audiences. He was world class, a heavyweight. The only thing he ever had any objection to was once when I suggested an arrangement. He loved the opportunity to play completely free, without any formal restrictions.” Though gigs became scarcer for Harris during the 1980s, he continued to work and record across boundaries until his death from prostate cancer on December 20, 1991 at the age of 55.

This article also appears in the November issue of All About Jazz New York.

The photo comes from Drummerworld, where you can also stream an unissued trio recording featuring bassist Jimmy Garrison and the obscure vibraphonist Warren Chiasson.

Thanks to Rudolph Grey and Alvin Fielder for their contributions.