Burning Hard Bop of the Day: "Milestones" with Ted Curson and more

If you are in need (and we know you are) of some blistering expatriate hard bop from the mid 1960s, here's your dose. Thanks to Carl Smith for the link.
Posted by Clifford Allen at 2:56 PM No comments: 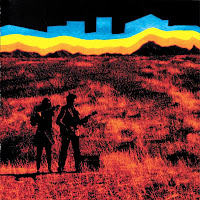 GREX
Live at Home
(SUA)
The second part of the AACM dictum of “Great Black Music – Ancient to the Future” surprisingly holds little cross-genre sway. Though groups of many stripes can lay claim to a broad range of influences and an output to match, a true understanding of those forebears is extremely rare, especially when those influences are both within and without from the “jazz” spectrum. Grex is a thankful anomaly in contemporary music, merging not only an affinity, but a true love for creative improvised music on par with folk-rock, psychedelia and modern composition. Formed at Mills College, Grex consists of the duo of guitarist/vocalist Karl Alfonso Evangelista and multi-instrumentalist/vocalist Rei Scampavia on eight originals as well as covers of “Autumn Leaves” (a fuzz march) and Lou Reed’s “Perfect Day” (recast as “Luke Skywalker’s Day” with a fragment from the Star Wars theme).
The opening flute/guitar piece, an introduction to “Little Me,” recalls guitarist-composer Michael Gregory’s “Clarity” theme, which upon extension into a multi-part piece for electric piano, guitar and vocals, reveals a striking compositional sense. Evangelista’s plugged-in wrangling has a progressive purity as well as a grungy ring, filling nooks and sailing over piano parts that shift from jaunty waltz to fleet clangor. But what really sets “Little Me” apart is Scampavia’s lyric delivery, a mournful plea for companionship and understanding in a surreal animal/human relationship that’s both dark and twee, contrasting enormously with the preceding McLaughlin-like guitar solo and recasting all preceding expressions. There’s a K Records-like boom-box overdrive to “Feelin’ Squiddy,” as Evangelista channels Pete Townshend and Sonny Sharrock in a landscape of melodica, piano, and an ode to marine life. Though subdued, the harmonies on “Retlaw” recall the halcyon days of bands like Superchunk, while backing by wiry, odd-interval guitar and droning keyboards point to an entirely different set of rules. Flute, vibes, rhythmic scratch and island slink imbue “Serious Business,” which would have fit nicely on a late 1970s Saravah side, and while the interplay between instrumental choices is interesting, their merger with biomorphic stories of love and loss is totally unique.  Live at Home is full of such surprises as the boppish guitar-piano cadenzas that bubble up in “Tater Corpse,” or the unhinged feedback explosion that stretches the seams of flute-aided lope in “Perseid.” Hopefully Grex gets some love from the indie-rock taste machine, because they are onto something really special.
Posted by Clifford Allen at 4:33 PM No comments:

I’ll admit it – while I find a lot to enjoy in straight-ahead jazz, it’s really hard to review straight-ahead jazz CDs. Part of this is a result of questioning where tradition and the mainstream fit in together, and if indeed they actually parallel one another in creative music. Bill Dixon had a way of putting this conundrum that I appreciated, paraphrased thusly: “tradition is something which surrounds you. You start from where you are, and you’ll get to the rest in time.” For example, one could say that, if one plays the tenor saxophone, Chu Berry, Dexter Gordon and Arnett Cobb will be part of what one plays, even if where one places oneself might be within a language of circularity and flutter-tonguing.

To me, it seems like the mainstream in contemporary improvised music more greatly embraces what would have been called (and might still be called) the avant-garde. Whether they’ve been turned out through jazz education or through the “university of the streets” (which now seems less common), jazz musicians today are both technically proficient to an amazing degree, and startlingly aware of a wide range of aesthetic / structural developments from the 1960s forward. The music of AACM-related composers-musicians like Anthony Braxton and Henry Threadgill, the chamber freedom of Jimmy Giuffe and Paul Bley, and profound developments in Europe all seem to be part of the core curriculum for young improvising composers. If one were to get instrumentally specific, with brass instrumentalists for example, rather than taking the crackling hard bop trumpet as a model/signifier, the significant languages dealt with have been formed by figures like Dixon and Ishmael Wadada Leo Smith.

In this climate, where does tradition fit in? Sure, it may be something underfoot, but what about directly engaging it through hard bop or standards? Why deal with an older model of “swing” when the very notion of “swing” has been in a continual redefinition for longer than many up-and-coming players have been alive? There are a number of things that have been needling my thoughts in this direction. First, through speaking with musician-composers who are invested in instrumental specifics as well as broader structural concerns, the question of “tradition” has come up multiple times – especially in my conversations with Anthony Braxton. Braxton is someone whose compositions encompass areas of sound, physics and experience that seem unmatched by any other musical thinker of our time. Yet, he’s also someone who just as much reveres the jazz tradition as he seeks out linkages between multivalent individual and collective experiences (i.e, traditions in humanistic generalities rather than specific aesthetics).

On occasion I have had the opportunity to speak with the drummer Alvin Fielder, who is a treasure trove of historical information about jazz drumming going back to its very beginnings – he listens, he plays, and he knows. Now based in Jackson, Mississippi, Alvin has worked with figures like Sun Ra, Roscoe Mitchell, Clifford Jordan, Ronnie Mathews, Dennis Gonzalez, Kidd Jordan, William Parker, Joel Futterman, the list goes on. With Futterman and Kidd, what they often play is totally improvised, yet one can hear the breadth of “tradition” in almost every set of phrases they create. Fielder is “free,” but he’s drawing linkages to Max Roach, Vernell Fournier, Kenny Clarke and the foundations of the music. When I sent him some CDs by the young drummer-bandleader Mike Reed, he was immediately able to hear Reed’s influences. Alvin has heard many currently active post-bop drummers, and figure out what they are trying to do as well as wax enthusiastically on the subject of playing music that swings. If Alvin, who also has an extraordinary critical ear, can find nuggets of clear importance in contemporary post-bop, why should it be difficult for someone who appreciates that same tradition to draw a comparable set of conclusions?

Lately I’ve received a sizeable stack of CD’s to review from artists who represent a decidedly “in the pocket” sub-sphere of this music. I’ll say again that my love for the music of Hank Mobley, Jackie McLean, Elmo Hope, Donald Byrd, Lee Morgan, or Duke Pearson – not to mention Bud Powell, Sonny Stitt, or Coleman Hawkins – is something that while not well documented in print, is pretty much a constant. Yet I find it very difficult to find the appropriate mental or verbal hook to begin dealing with younger practitioners of this approach to music. I can see the talents of these improvisers – people like Jacam Manricks (alto), Orrin Evans (piano), Eric Alexander (tenor) and Steve Davis (trombone) can surely play. They can also compose, and the results are uniformly vibrant, swinging, colorful and kinetic. But I come back to a basic question when listening to the newer crop of hard boppers – why?

There seems to be no problem engaging the space just to the left of post/hard-bop, occupied by improvising composers like Mike Reed, Joe Morris, Amanda Monaco (guitar), Jakob Sacks (piano), and Jason Adasiewicz (vibes). The work of artists like these seems vital and doesn't need a second guess. When giving drummer Tomas Fujiwara’s latest disc a preview spin the other night, it was clear what he and his compatriots were doing and what their reasoning was, even if it didn’t always hit on all four cylinders. I trust him and I trust his music. Sadly, I’m not sure I can say that about the otherwise clear music of contemporary hard-boppers as I’ve experienced it, which is strange – there aren’t too many obfuscating knots, and for that matter knots and contradictions can seem problematic even when they are at the same time objectively “interesting.” It's a question that as a critic, I ask myself as much as I ask the music.

Initially, this post was going to be a way of reviewing a slew of contemporary post-bop CDs by a number of promising blue-chip players, most of which I liked well enough. Now, I’ve gotten to the point where I’ve over-thought it, perhaps. But at the same time, I don’t want to be one of those people who says that musician X’s life work, at the tender age of 37, is invalid JUST BECAUSE he or she is writing their own AABA compositions in 4/4 while instructing the pianist to take a 96-bar solo on the changes. Telling someone else their work isn’t “hip” still seems like it could be keeping food off their table. But I’m looking inward because I want to know why asking "why" seems necessary with contemporary straight-ahead jazz, and at this point, the result is a paucity of "swinging" review copy.

I’m looking forward to your responses.
Posted by Clifford Allen at 9:33 PM 9 comments: