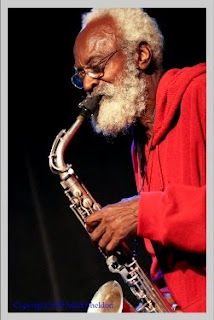 History is a funny thing. I found myself wondering what I was doing with respect to the history of this music while spinning records the other night as part of my biweekly slot at KOOP in Austin, mostly late 60s and early 70s American expatriates in Paris. It was a heavy time for sure, but only a small slice of what's come before and since. The program is called "The Cutting Edge," which by its very nomenclature should be current. Sometimes it is, sometimes it isn't.

The other day I got something in the mail that I thought I would never see (surely a lot of people feel the same way): a new record by 74-year-old reedman Giuseppe Logan. Usually credited as "Giuseppi Logan," his birth certificate apparently reads "Giuseppe." Logan vanished in the late 60s, although he'd pop up from time to time playing in the subways and on the streets of New York. Apparently he was institutionalized numerous times because of mental health issues. Logan was thought to be dead until he appeared in the audience at the Vision Festival a couple of years ago. He now has, with assistance, an apartment in the East Village and has been rehearsing and playing from time to time. That has resulted in a quintet disc for Tompkins Square, his first record in over 40 years. Back in the halcyon days of free jazz, he made two leader-dates for ESP and sideman appearances with Patty Waters and Roswell Rudd.

Logan is joined here by two young free players - bass clarinetist/trumpeter Matt Lavelle and bassist Francois Grillot - as well as peers Dave Burrell (piano) and Warren Smith (drums). It's a nice, if uneven date; at times Logan seems to be struggling with phrasing and intonation, though he's clearly happy to be making music in a professional setting again. I'll be reviewing it shortly for All About Jazz.

I really haven't figured out my own feelings on the resurrection of musicians who had gone through a disappearing act. Bassist Henry Grimes, back on the scene from the beginning of the decade, seems to have found his footing as a player once again. His story - dropping off in 1966 and presumed dead until he was found working as a janitor in LA in 2002 - is really something else. Percussionist Cleve Pozar, who was "on the edge" for a time, is now sharing his homemade electronic bata works on You Tube and has renewed his association with multi-instrumentalist collaborator Cooper-Moore. But the rejoinder that young, talented musicians have a hard enough time getting gigs and face time without continual diversions of attention to history isn't lost either. Jazz certainly has suffered because of too much attention paid to history, but it is a double-edged sword because as an art form, improvised music is not often taken seriously enough and therefore history/validation is something held onto passionately.

Personally, the fact that Giuseppe Logan has a chance to make a record and play with a cast of excellent musicians in his sunset years seems like a beautiful thing. I think the same can ultimately be said for any musician still trying to work their craft despite many years of hardship. It's good that it's able to happen with a little less pain and suffering on the part of the creators. But that's not to say that any number of concerts and recordings by younger free players shouldn't be given equal or greater time. Those guys need it too.

Photo of Giuseppe Logan courtesy of Mark Sheldon.
Posted by Clifford Allen at 9:34 AM