Thankfully - and perhaps confusingly - I prefer to do my year-end lists in alphabetical order. It's probably the library professional in me. But this is a funny and very true template for how the list is really created. 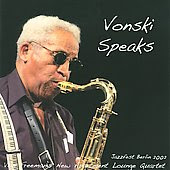 And though it arrived in my mailbox a little late to enter into any sort of contests (which really just serve to take time away from whiling hours at the day job), tenorman Von Freeman's Vonski Speaks (Nessa) is absolutely incredible. I'd listened to him piecemeal before and long appreciated the work of his brothers, the late drummer Bruz Freeman and oddball-funky guitarist George Freeman, but Von to me was always a tougher nut to crack. Still is, but at this point I worry less about cracking and just enjoy listening to his utterly surprising, whoop-and-holler phrase choices. Thirty-odd years earlier, he cut the LPs Have No Fear and Serenade & Blues for the same Nessa label, which are corkers as well, and age has only brightened the corners of his playing. If you've got some Hanukkah funds kicking around, I highly recommend Vonski Speaks. Look for a "real" review shortly at All About Jazz.

Also forthcoming at AAJ (finally): the words of Bill Dixon, and a short stack of reviews covering "solo playing" in all its forms in 2009.

Until then, happy holidays and Gajan Kristnaskon from "us" at Ni Kantu.
Posted by Clifford Allen at 10:30 AM No comments:

Well, it's that time again. It's the end of 2009 and I still haven't even listened to everything that's come out and been sent my way in the past year. Aargh. These are among my favorites or what I feel is most significant in the music released between Turkey Day 2008 and today, with apologies to Nessa's release of Von Freeman's Vonski Speaks. (I haven't got my copy yet and can already tell it would make the list. But without a listen... ) I added the categories of "Labels of the Year" and "Unavoidable Artist(s) of the Year" to mark stellar achievements in releasing interesting music, and in the latter case, heretofore unheard-of levels of visibility/self-promotion/general awesomeness.

Anyway, all of these discs can be found at your local brick-and-mortar retailer or among the many independent online retailers.You can find actual reviews of these titles (penned by yours truly) in All About Jazz, Signal To Noise, Paris Transatlantic, Austinist and Bagatellen.

*meant as a compliment
Posted by Clifford Allen at 12:14 PM 1 comment:

Well, Ni Kantu might just be for reedman Phill Musra like what Hat Hut was for Joe McPhee in the '70s, but by my own estimation that's perfectly all right. Phill has been kind enough to hip us to a couple more YouTube videos of his recent work, both of which include the stunning tune "Egypt," which originally appeared on the Creator Spaces LP (Intex, 1974).


And here he is with his trio:


For what it is worth, I've always been a little leery of the moniker "Spiritual Jazz" to describe a music for which only one part of it is spiritual as such. There's always a lot more going on than "merely" the spirit. But if one is looking for a definition of the spiritual in improvised music, Phill's music - along with artists like Pharoah Sanders and the later Coltrane - is certainly just that. Enjoy.
Posted by Clifford Allen at 10:37 AM 2 comments: