Just a brief entry today to wish a happy birthday to Christiern Albertson, jazz historian/archivist, record producer, critic and radio announcer. Albertson is probably best known for his biography on Bessie Smith, Bessie (1972). Born in 1931 in Reykjavik, he emigrated to the US in 1957. An individual who, in the 1960s, brought traditional jazz and blues musicians (Elmer Snowden, Meade Lux Lewis, Lil Armstrong) to LP-weaned audiences, he produced sessions for the Riverside, Columbia, and Prestige labels and worked as the general manager for WBAI-FM in New York.  In the 1970s, he curated a PBS television program, The Jazz Set.

That is, of course, only a slight and partially-informed blurb on someone who has done a hell of a lot of work in this music (and whose autobiography can't come soon enough). 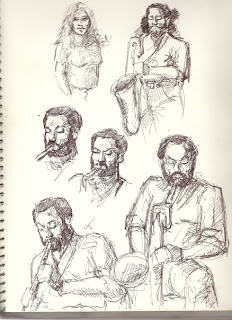 It’s unfortunate that occupying the orbit, for a time, of another more charismatic artist can relegate certain musicians to also-ran status, despite an individual voice and hard work as a bandleader-composer. For every commercial success like Pharoah Sanders there are countless stories like that of the undeservedly obscure saxophonist Charles Tyler, whose association with Albert Ayler informed but didn’t determine his artistic path. Born in Cadiz, Kentucky on July 20, 1941, Tyler was raised mostly in Indianapolis, starting on clarinet at age 7 and by his teen years was playing alto saxophone in the school band, alongside fellow Indy staples like James Spaulding and Ray Appleton. During the summer, Tyler and his family visited Chicago, New York, and Cleveland – where he met the young tenor saxophonist Albert Ayler at age 14. Tyler recounted to Michael Cuscuna that “I was walking down the street during one of my summer sin Cleveland, carrying my alto. This guy about 19 years old with a patch of red skin on part of his chin stopped me and introduced himself and told me that he played saxophone too and started talking about music. Then, when I moved to Cleveland, I came across this saxophonist with white hair growing out of half of his beard. That’s how I recognized him and how our relationship began.”

After a stint in the army from 1957-1959, Tyler relocated to Cleveland in 1960 and began playing in earnest, rehearsing and discussing the spiritual with Ayler. During the first half of the decade, Tyler commuted between Cleveland and New York, also woodshedding with and encouraging Albert’s younger brother Donald on trumpet. He made his first recording with the Aylers on May 1, 1965, in a Town Hall concert that was released on ESP as Bells. Ayler’s Spirits Rejoice, recorded later that year at Judson Hall was Tyler’s final commercial appearance with the Ayler juggernaut (though recordings from Slugs’ were subsequently released). Indeed, his place in the music was enough to inspire LeRoi Jones to write in 1966 that “only Charles Tyler of the Ayler unit has the big wailing heavy alto sound that satisfies my particular need for flesh and blood.” It wasn’t long after that they parted ways, owing to the increased commercialization of Ayler’s music. But Tyler had already stepped out as a leader for ESP by this time, recording four of his own compositions on the eponymous Charles Tyler Ensemble (slated for reissue this fall).

In late 1966, Tyler returned to Indianapolis to study at the University of Indiana under David Baker, recording with a string trio on the intriguing and hard-swinging Eastern Man Alone album; he then relocated to Berkeley, California to study and teach. His West Coast experience brought him into the orbit of players like David Murray and Black Arthur Blythe and writer Stanley Crouch, and he also began playing the baritone sax again (his army band axe). Tyler moved back to New York in 1974, studying at Columbia University and leading his own barnstorming freebop groups with Blythe, trumpeter Earl Cross, drummer Steve Reid and others, well-represented on albums like Voyage from Jericho (Ak-Ba/Bleu Regard) and Saga of the Outlaws (Nessa). During the height of the “loft jazz” years, he ran The Brook, a performance space, and his own Ak-Ba label. While other mavens of the scene became veritable jazz stars, Tyler didn’t meet with the same success and relocated to Europe, recording with other expatriates like Khan Jamal and Steve Lacy. Though he continued to release powerful dates as a leader for labels like Storyville and Bleu Regard, Tyler was still relatively unknown in the jazz avant-mainstream when he died of heart failure in June 1992 at age 51.

Drawings of Charles Tyler performing at Environ by Brian Olewnick. This article first appeared in All About Jazz New York.
Posted by Clifford Allen at 10:05 AM 2 comments:

The fantastic thing is not only that he's still working, but that his approach to composing and to the instrument still evolves to this day, even as young players who have absorbed his influence are making waves as well (Nate Wooley, Taylor Ho Bynum).

Ben Young did an excellent "Artist Profiles" 5-hour set on WKCR FM yesterday in honor of Bill's birthday. It's too bad that the program is not archived, because there were some tremendous performances - many of which remain unreleased commercially - available for in-depth listening and analysis.

Tapestries for Small Orchestra, the latest Bill Dixon offering on Firehouse12, should be available for pre-order soon. Here's a preview...

Posted by Clifford Allen at 1:39 PM No comments: