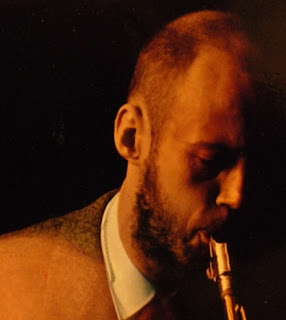 Note: this article first appeared in All About Jazz New York, March 2009. The image is a detail from the cover that Nordstrom used for his Bird Notes LP and EPs.

The mythologizing of a musician coming from seemingly out of nowhere to turn established forms on their heads is often given a purely American sort of credence—specifically in the work of Ornette Coleman and Albert Ayler. In Sweden there was a saxophonist who experienced all manner of difficulty and misunderstanding throughout a nearly forty-year career, never quite reaping the benefits of grudging acceptance let alone love and adoration. That saxophonist was Bengt Nordström, known to Stockholm’s jazz public by the nickname “Frippe.” Nordström was born in Djursholm, Sweden, on July 13, 1936, and though he began as a drummer, switched to clarinet in his late teens, inspired by New Orleans and traditional jazz played in Stockholm by the likes of the Alligator Jazz Band. At nineteen, he started his own trad band and attended the Nalen Jazz School in Stockholm, studying alto saxophone with Rolf Billberg and Rolf Blomquist. The alto became his primary horn, though he also played tenor saxophone.

At 23, Nordström heard Sonny Rollins live in Stockholm. At the same time, he heard Ornette Coleman on Swedish radio, and these players supplanted Tony Scott and Buddy De Franco among his listening pantheon. Nordström is quoted in the liner notes to Meaningless (Blue Tower, 2003) as saying Coleman’s approach struck him as “more definite and physical” than the music he had been listening to. Nordstrom met Albert Ayler on the tenorman’s Scandinavian sojourn in 1962, and though they never played together, they spent hours listening to records in Nordstrom’s flat. Ayler’s gruff sound and wide vibrato had a definite affect on Nordström’s playing, but what is especially prophetic about their meeting is that it would result in Ayler’s first official recording, Something Different!!!, which Nordstrom recorded and released on his Bird Notes imprint. Ayler’s seeming disregard for the themes and forays far from tunes’ rhythmic and tonal parameters was an influence on Nordstrom’s aesthetic, as his small-group recordings from the period show. Most of these sessions were released in extremely small numbers on the Bird Notes imprint and some even featured Nordstrom himself playing solos over Miles Davis records.

In 1967, Nordström recorded Natural Music, joined on one side by bassist Sven Hessle and playing unaccompanied on the other. In fact, Nordström frequently played solo and had already released micro-edition recordings of unaccompanied saxophone music. Unhindered by an ensemble that wasn’t quite where he was, Nordstrom’s playing here is full of folksy whims, wandering but utterly committed to the moment and as harsh and braying as his tone might seem, Nordstrom is delicate and very lyrical. Though he appeared as a sideman with Gunnar Lindquist and Don Cherry in the late Sixties and early Seventies, his tactic of jumping onstage and playing his music at nearly every local jam session met with disapproval from Stockholm musicians. Still, he was able to find sympathetic ears and recorded an album of his own music for Dragon Records in 1982, Now’s the Frippe Time. Nordström remained somewhat active throughout the Eighties and mentored Swedish reedman Mats Gustafsson in addition to playing in a quartet with drummer Peter Uuskyla, bassist Bjorn Ålke, and violinist Lars Svantesson. After a decade-long illness, Bengt Nordström died in 2000 at age 63.