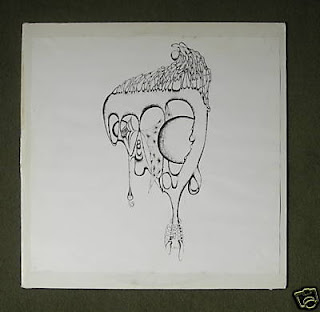 I got a phone call tonight from Philip Musra, a reedman and composer living in Los Angeles. He’s not a figure who’s well-known in the jazz (or even avant-garde) community, though his work in the 1970s with his brother, multi-instrumentalist Michael Cosmic, Turkish-born drummer Huseyin Ertunc, and bassist-composer John Jamyll Jones is the stuff of curiosity and possibly legend. Part of what has made their music – available on a small scattering of privately-pressed LPs – so interesting is that it does not sound like anything else. I recently characterized the trio music (without Jones) as something like a collision between the AACM and Alan Sondheim’s Ritual 770 or another, similar wild-and-woolly artists’ collective. The group was based in Boston at the time and also worked with pianist Gene Ashton (now known as Cooper-Moore) and poet-vocalist Ntozake Shange, among others. Apparently Musra and Cosmic also spent time in Chicago studying with AACM musicians. Until recently, not much was known about their concurrent and subsequent activities.

For me, the music of Musra, Cosmic and Ertunc was extraordinarily important and seemed so from nearly the moment I heard it. At that time, I was focusing more on collecting records and listening than I was writing about music. There was a wall I felt had been reached in both my hearing and what I was exposing myself to—and It seemed like in this music there might be a fixed way of doing things. That sounds laughably naïve to me now, but sometimes one needs a good shove to the other side in order to conceive of the possibilities. Seven or eight years ago when I found these records, they were that very push. Shimmering percussion dense but hanging in midair, maniacal insistence on mini-organ chords or frantic arpeggios on a glockenspiel, and intertwining flutes and saxophones are the linguistic building blocks, and the dialect is unlike anything I had previously experienced.

Jazz and improvised music is a very big field with room for a hell of a lot of approaches, but as with any field it’s guilty of narrowing itself. As a reviewer of new releases, one can hear a decent slice of the music being made now (I'd hazard a guess that it's impossible to hear all of what's "relevant"), and certain methods become discernibly popular. Sometimes those methods are really interesting and provide a lot of fruit for both the improviser/composer and the listener. But that’s just when one needs a shock – not necessarily of the NEW BIG THING, but of an inversion of what’s already been done. Sometimes those refinements can be just enough to turn one on one’s ear, whether it’s the work of Musra and company or a younger crew of artists. It’s just as often “throwing shit at the wall to see if it sticks” as it is a measured approach to reassembling prior experiences into a unique object.

Of course, it’s not anybody’s job to “shock the critic” or one’s peers, and that is not entirely what I’m getting at. Doing what one does resolutely and well makes one impervious to flak, and who is to argue with the artist who is doing exactly what THEY want to do? However, I do sometimes feel the need to have my ears rechecked, and for that I’m very glad that there is music out there that defies traditional categorization or law. Often working resolutely and finding a way to entirely obscure the boundaries of convention or history go hand in hand.

Note:
While not currently in print on vinyl, the music of Philip Musra, Michael Cosmic and Huseyin Ertunc can be found on the CD reissue of Ertunc’s Musiki, available here and here. Their participation in John Jamyll Jones’ Worlds Experience Orchestra is documented here. There will be more of Musra's music available in the near future, and we can look forward to a filling-in of a few of this music's historical holes.
Posted by Clifford Allen at 11:15 PM