At one point I used to pen an occasional column for Paris Transatlantic called “Reissue This.” I took an in-depth look at certain recordings, most of them hard to find and not extant in the digital realm, and made a case for their value in the contexts/history of modern improvisation. No call was made to specific labels, though a couple of titles – Norman Howard’s Burn Baby Burn and Selwyn Lissack’s Friendship Next of Kin, for example – were in fact reissued on the strength of the column. As an avid collector, I wasn’t necessarily perusing the blogosphere for stuff that was being file-shared or made downloadable as something that would be a good candidate; normally, I just picked something out of my collection that I liked and thought relevant. However, this Paris Transatlantic column became referenced by some of the sites offering illegal downloads of titles that I had mentioned – John Tchicai’s Cadentia Nova Danica on Polydor was one.

At the time I thought that was pretty wack – I didn’t condone people ripping FLAC files of rare albums and throwing them up on the web for anybody. It’s not just because, like some people, I prefer to have the object in hand and really don’t care to own a copy unless it’s the real thing, whether vinyl or CD. I think that the artist does deserve some compensation. But then again, if I’m paying dough for a used copy of an LP, the artist is of course not receiving a dime from that sale (though one would hope that they did upon the issuance of the title).

Yet in my quest to hear as much as possible from a given artist’s oeuvre, I have also traded tapes and CD-Rs among friends to acquire unissued live recordings. I write it off as something “educational” that I’m able to learn more about an artist whom I may at some point interview or write about. I don’t download these things myself, but in the grand scheme of things it doesn’t matter – it is a behavior that’s equally questionable in its morality. My interest in such practice in light of the ethics of download mania has waned a bit. I still have and listen to those recordings, some of them quite frequently, ill-gotten gains as they are.

This subject is on the brain, however sketchily, because of a few things that have come to light in recent months. One is that an article was published in the Wire on trumpeter-composer Bill Dixon; the writer later bragged on another site that he had downloaded certain titles from the artist’s oeuvre for free from some of these obscure-music blogs. I don’t know if it’s much different that I paid $40 for out of print vinyl from the same artist years ago, but at least it wasn’t being shared and passed along the information superhighway. I also interviewed Dixon, and he railed against the lack of appreciation for artists on the part of record companies AND the refusal of citizens to pay for their art. By the same token, I acquired a CD-R of unissued performances of one of his orchestras as a prequel to the article, but since it was not being shared and was for my own “education” he was copacetic with my acquisition and review of this music.

Now, Eremite Records has re-released two rare vinyl albums by Sunny Murray and the Black Artists’ Group. These are in limited-edition runs of 600 copies on LP with no CD or authorized digital-download counterpart. They are being presented as facsimile reprints, sort of like “art reprints” authorized by the artists. The label proprietor has asked one of these download blogs to take down files of the Sunny Murray from the site, a request that the site complied with. But, with respect to those who don’t have the means to listen to them on vinyl, this is a fairly limited medium. In all likelihood, after the Eremite reissues have gone out of print, these will be up again on the blogs to download. And I'm still quizzical as to why Eremite is not doing a CD version of this as well, or a legitimized download at, say, $5 a track with proceeds going to the artist.

I don’t have the perfect prescription to these problems. I don’t approve of the “instant record collection” that the downloaders have access to. But does it excuse my own acquisition of unlicensed material for research purposes – even if I DO buy a significant amount of records and can act in good conscience on that front? Does it matter to prattle on about the artist’s right to compensation on a bootlegged release that in its original incarnation didn’t net the artist more than a $50 session fee and a sandwich?

I had been hoping – in my small way – to once and for all make a definitive statement of my own on the downloading phenomenon, but the more I think about it the less immune from criticism I become as both a consumer and a collector. The "old model" for distributing music is fast changing, but should one necessarily be forced to give up the "old model" of consuming or, more importantly, appreciating it?

- I weigh in confused as ever.
Posted by Clifford Allen at 4:56 PM No comments: 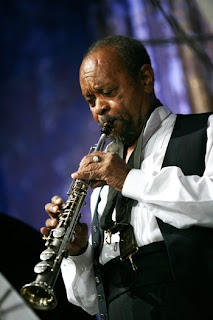 In conducting interviews with musicians, I have been lucky enough to consider many of these artists – those who I’ve spent countless hours listening to – friends and colleagues. Even those who aren’t exactly peers and who had contributed a significant body of work to the art form a decade or so before I was even a glimmer in my mother’s eye. One of the artists who I became immediately attached to was the reedman Prince Lasha, who passed away December 11 at age 79. I interviewed Lasha (or “Peasant Prince” as he liked to be called) for All About Jazz New York in 2004. At that time, he was working in Odean Pope’s Saxophone Choir alongside Michael Brecker and James Carter. We spoke over the phone for a few hours and called it a night, getting down to the vibrant nitty-gritty of his life from working with altoist Sonny Simmons and recording with Eric Dolphy, Texas saxophone players, touring Europe and his subsequent success in real estate.

It didn’t take long before Lasha began to call me up to reminisce about the halcyon days and talk about his philosophy, spirituality, books he was reading and records he’d like to release. His tape cache must have been astounding—he recorded EVERYTHING. When he was working on new compositions he’d call me up on the phone and play them to me, often while at the beach drinking chardonnay. He’d set the cordless down and purr on baritone crystalline ballads, or deft flute birdsong.

One thing which really struck me about getting to know someone as deep in the music as Lasha was how listening to his records became like another conversation with him – the cadences in his solos were exactly like that of his speech. Bubbly, vibrant and overflowing with joy and poetry, they were like a long laugh and more than a few gentle prods in the direction of a complexity far greater than earthbound thought. Lasha had the habit of giving everyone he befriended a new name; he said it went back to his friendship with Ornette Coleman in Fort Worth in the Forties, when Ornette was “Captain Hornblower” and he was “Peasant Prince.” I became “Allen’s Alley” for Allen Eager, and my then-girlfriend was “Trolley for Molly.” My mom, Susan, was “Sweet Sue.” And so on. When he had musician friends over, he would pass the phone to them so that we could meet, and I always felt invited to the party, even though I could never be there in person – Lasha lived in Oakland, California and as a funds-short writer and student, I never seemed to have the bread together to buy a plane ticket out there. I figured it would happen eventually, but it never did.

I became inordinately busy with graduate school in 2005 and our phone conversations became infrequent, finally tapering off later that year as other demands took over. Lasha didn’t use email, of course, but he was really only a phone call away. It feels like there should be an apology to Peasant Prince for losing touch, but I know he would say something like this (with a chuckle): “It isn’t anything, brother. The most important thing is you’re here right now!” So thank you, Prince, for letting me be a part of your life and sharing your experiences with me. It meant a ton.

The Numbers Are In... 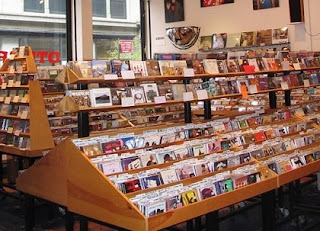 2008 was, for me, a pretty good year as far as record releases go - a significant amount of new recordings really piqued my interest, and the reissue mill wasn't too shabby either. I believe that this is the first time I've ever submitted a "list," though I think my choices were different for both the Village Voice Jazz Critics Poll and the All About Jazz poll...

Irrespective of genre, here are some titles that really struck my fancy. Some of these I have reviewed elsewhere, others not. For reviews of these discs, take a quick trip over to All About Jazz, Dusted, or Signal To Noise - all have been covered extensively.

In no particular order other than alpahbetical, my top new discs are:

Other than that, people are still dying with less recognition than they should have, people aren't getting paid for reissues of their material, and downloading is rampant.

Please support your independend music retailers, either online or (GASP!!!) in a storefront near you and check out some of these recordings.
Posted by Clifford Allen at 7:03 PM No comments: 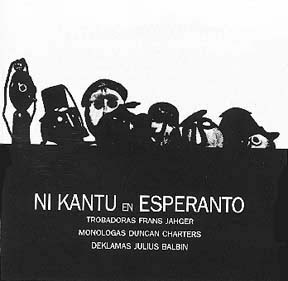 Welcome to Ni Kantu. The name comes from the first ESP-Disk release on vinyl in 1964, Ni Kantu en Esperanto, a sing-along album in Esperanto, the universal (to some) language. The name of the record translates to "Let's Sing in Esperanto," so the blog is essentially "Let's Sing." Or something like that.

The idea behind this blog is, as an otherwise-"employed" music critic, to present thoughts, musings and occasional reviews as well as material related to previously published items (such as interviews that begot articles, etc.).

As I also write for All About Jazz, Paris Transatlantic, Bagatellen, Signal To Noise (and previously for One Final Note, Minneapolis' City Pages and Line Magazine), there may be some cross-reference (though not cross-publishing) here.

I hope that you can find useful information here, though I strongly urge you to respect fair use and copyright laws. I will try to do the same.